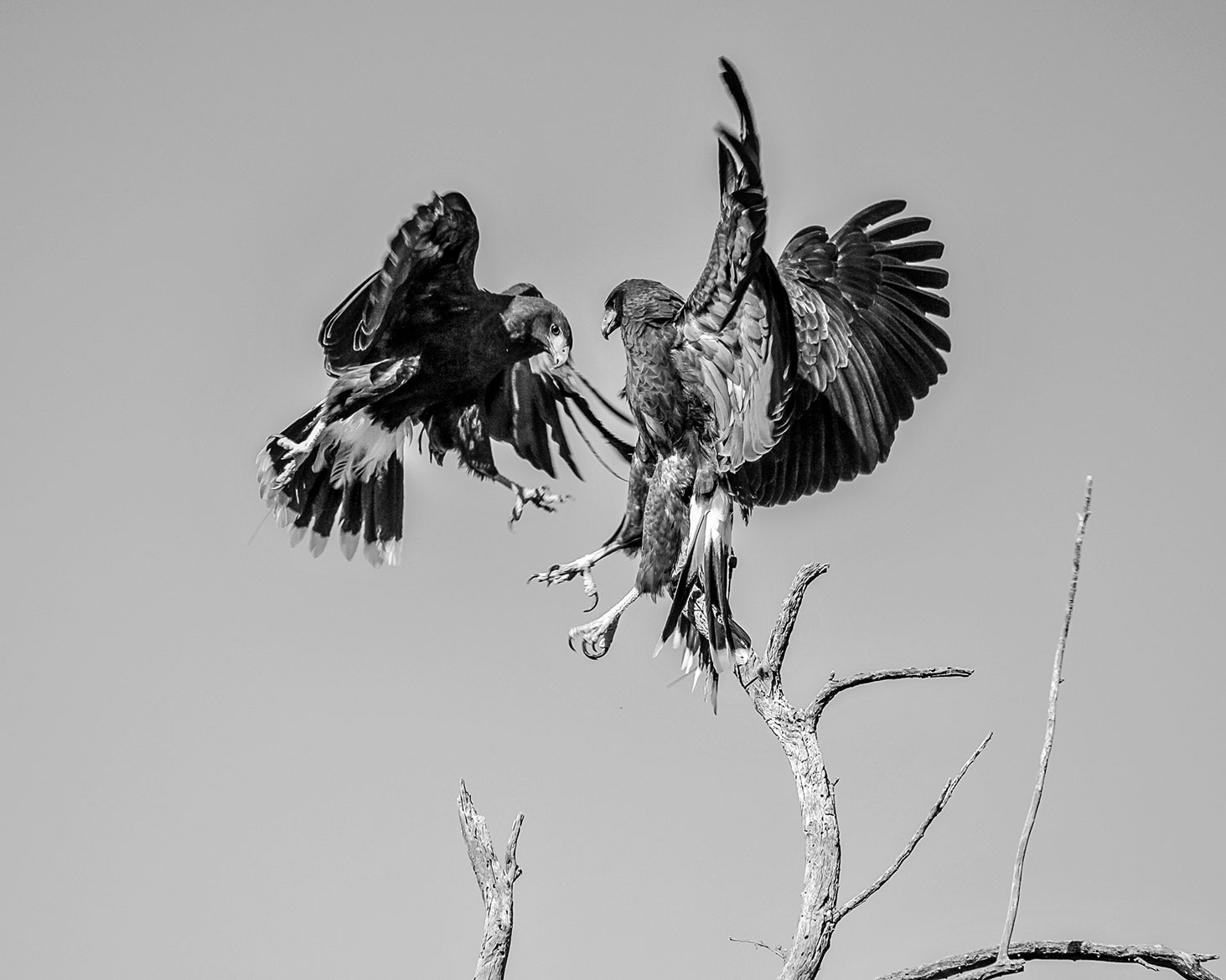 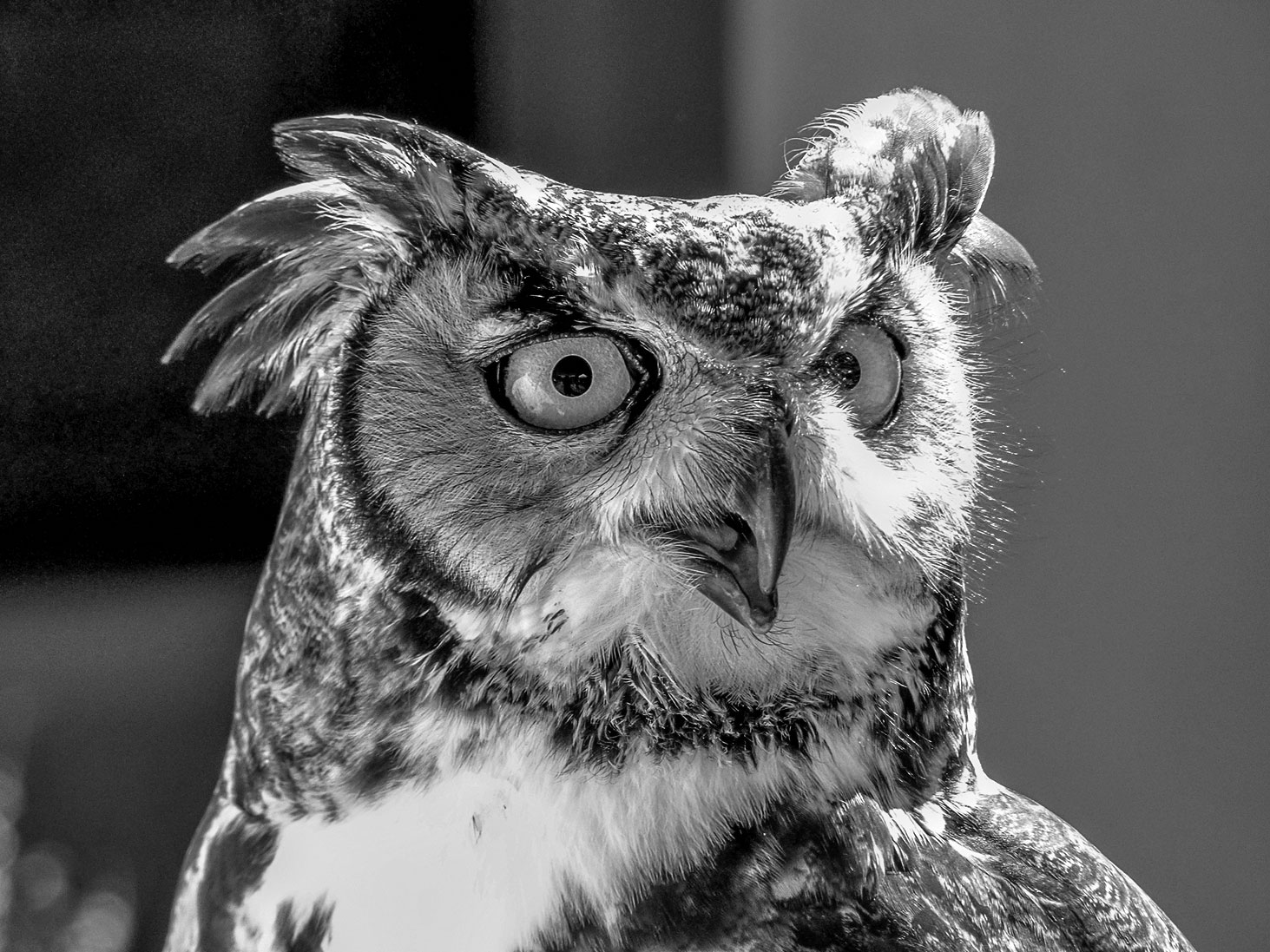 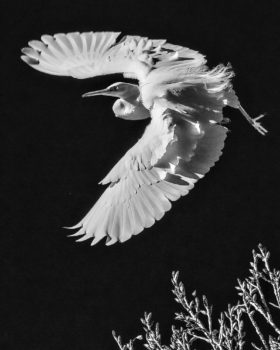 The Photo Club of Quail Creek continued into 2018 with its monthly members’ contest having a theme Black and White. Each club member could enter three photos taken in the last three years. We had 35 submitted photos, all of which can be seen on our Flickr site: https://www.flickr.com/photos/[email protected]/sets/72157692476426401.

Denny Huber won First Place with his photo Harris Hawks. Denny said, “I photographed these hawks at the Desert Museum; they were performing for the crowd and showing off.

The larger female would fly around and bully the males off of their prized perches. I was poised for these moments and was lucky enough to land this shot.

I like the shot better in black and white because the brilliant blue desert sky overwhelmed the birds somewhat. Since hawks aren’t very colorful to begin with, converting to monochrome made the shot more about contrast. I used the high contrast B&W preset in Lightroom to convert and then adjusted the shadowing to what I thought looked right.” Denny shot this with a Canon Rebel T6s, at 93 mm, 1/500 sec, f/5.6, ISO 100.

Eleanor Houts won Second Place with her photo Great Horned Owl. Eleanor commented, “Seldom is one fortunate enough to be so close to a wild bird, such as this magnificent Great Horned Owl. This handsome, amber-eyed fellow represents a species that averages 22” from their proud heads to the tips of their tails, boasting a wing span of nearly four feet. Owls symbolize a variety of concepts in many cultures including intelligence, bookish pursuits, power and wisdom. Native American tribes viewed the owl as a protector against harm and their feathers were ritually worn to ward off evil spirits. The photograph was taken at the Desert Museum in Tucson, Arizona. Conversion from a color to a black and white rendering was the sole post processing refinement.” Eleanor was using a Panasonic DMC-FZ70, at 373mm, 1/320 sec, f/5.6, ISO 200.

The photo Sweetwater Bird by Larry Hudson placed third. Larry said, “This bird photo was taken at Sweetwater Wetlands Park in Tucson, just west of Interstate 10 near Flowing Wells. I was walking the trail around the park when I saw an egret on a branch about to take off. I put my camera on manual focus and focused it where I thought the bird would fly. Luckily, everything went as planned.” Larry used a Canon Rebel T2i at 313 mm, 1/2000 sec, f/7.1, ISO 250.