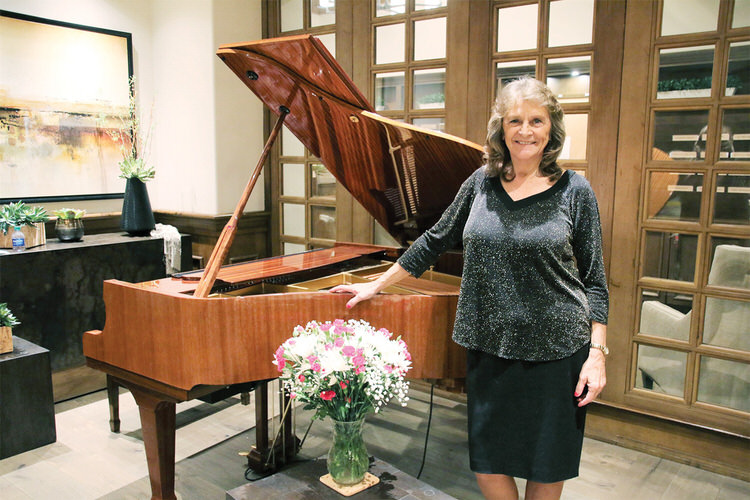 If you have lived in Quail Creek for any length of time, you can’t help but be amazed by the incredible pool of talent right here in your neighborhood. This is especially true in the areas of the fine arts.

On Monday, Feb. 28, one such Quail Creek resident shared her musical gifts with 50 members of The Women of Quail Creek (TWOQC) in an intimate sold-out piano concert in the Copper Room at the Madera Clubhouse.

Rada Neal is a composer and pianist who began her life in a refugee camp in Germany, the daughter of two Yugoslavian refugees. Shortly after World War II, with the help of the Serbian Church, her parents moved to Indiana in the hope of finding a safe place to live, work, and educate their family.

Rada shared anecdotes of how she became interested in the piano, saying that her first piano was given to her family by neighbors who were moving and didn’t wish to relocate the heavy Gulbransen upright. She distinctly remembers watching eight men lowering it down the stairs into her family’s basement. Her fascination and love affair with the piano grew from that moment.

Rada’s interest in the piano was nurtured by her mother who hired a teacher to give her lessons as a young girl. Later, she studied music at the School of Music at the University of Indiana and spent much of her career teaching music.

Although trained in the classical style, Rada says that she always preferred to experiment with her music to find her own style. She eventually began composing her own music and has recorded seven albums of original compositions. Her passion is to make people feel good when they hear her play.

Rada’s career has led her to play at venues ranging from the Super Bowl Halftime Show in 1988 to Carnegie Hall to The Grand Ole Opry. She continues to write, practice, and perform at private events.

“I like to write lyrical, melodic, and romantic melodies. I don’t need to have lyrics, yet I love how a good lyric will set the tone of a piece.”

TWOQC wants to thank Rada for a very special evening!