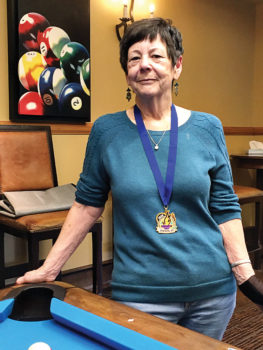 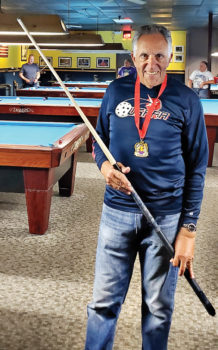 “Sometimes you get lucky—it’s the game of pool,” says Kay Mertes, Quail Creek resident and member of the Quail Creek Billiards Club. Kay was the 2020 Gold Medal winner of the 8-Ball Women Singles in her age division, at the Southern Arizona Senior Games, held at Pockets in Tucson, on Jan. 28. She defeated five other women from the Tucson area to win.

But luck must be accompanied by talent, skill, and form, which Kay possesses. She did not lose a game, although the other women competitors were very skilled, as well. When she was younger, Kay played casual pool. She also had been a league bowler as a teenager and adult, on teams that often won. However, this was Kay’s first individual gold medal—a very special accomplishment for her. She just beams when you talk to her about her experience playing in the tournament.

Two years ago, she joined the Quail Creek Billiards Club and took the lessons that were offered. Since then, she practices and plays three or four times a week, honing her skills and enjoying the game. She praises certain members of the Billiards Club who have assisted her in improving her technique, “Everyone is so helpful and supportive.”

Kay also plays during Ladies Pool Sessions, in the Billiards Room at Madera Clubhouse on Thursday afternoons, a time set aside by the club for women only. She is an inspiration to her  colleagues.

The Quail Creek Billiards Club is proud of its winners and participants in the Southern Arizona Senior Games. More division competitions will be taking place in March. Kay Mertes is now paired up with Tom O’Dierno in the 8-Ball Mixed Doubles on March 16. Kay reflects on her win in January, “I played well, and it was good to win.” Maybe another gold medal is in her sights.