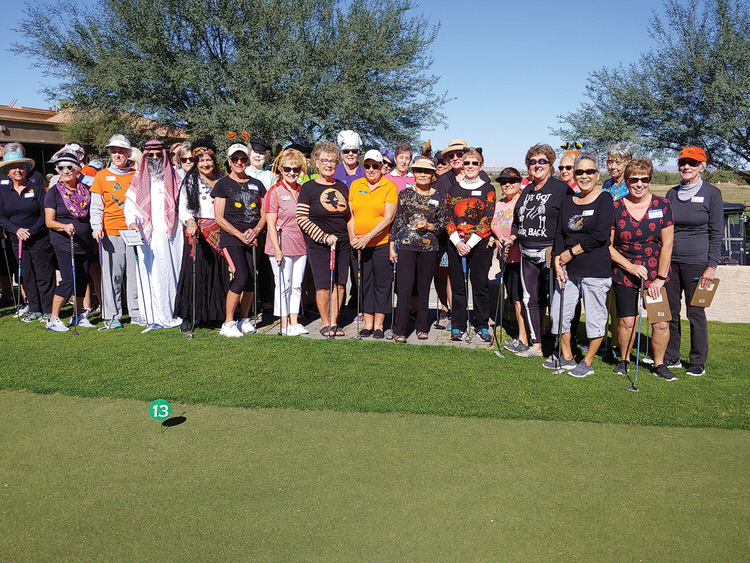 Lady Putters in the Halloween spirit (photo by Peggy McGee) 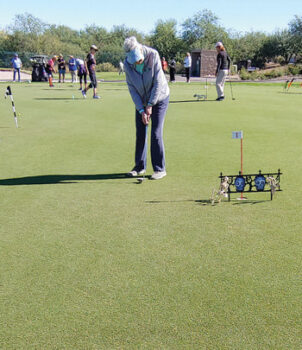 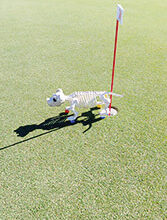 The Lady Putters gleefully returned to the putting green on Oct. 13 after its having been closed through the entire summer while the green was being renovated. The repairs were followed by the traditional overseeding that takes place in early fall each year. The ladies said they had never seen the green look so good, making them especially appreciative of the renovation work.

After putting on the temporary green, which was much smaller and meant putting into the same hole twice per round, the reopened green presented many challenges. The holes were farther apart, requiring much longer putts to reach the hole. Alas, this meant no one scored five holes-in-one. However, Sue Scott managed to get a hole-in-one on the money hole, the hole considered to be the most difficult. The ladies are hoping that once they become reacquainted with the green, their scores will improve.

Membership in Putters is opened to all Quail Creek ladies, whether owners or renters, full time or seasonal. A newcomer may try the Putters twice before making a commitment to join. Annual dues are $20 a year, and dues for those joining now will not expire until Dec. 31, 2022. Ready to give the Lady Putters a try? Just show up on the back patio of the Madera Clubhouse on a Wednesday between 9:30 and 9:40 a.m. with a putter, one ball, and $1. One of the members will take you under her wing and explain the rules.