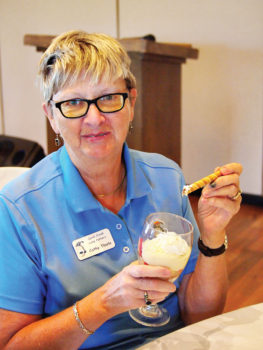 Putting started on October 19 with the members singing Happy Birthday to Putters President Cathy Thiele. It was the first time since June that there were four ladies on each team—the winter residents are returning!

After putting on a relatively cool morning, 32 Lady Putters adjourned to the Crystal Ballroom where they enjoyed a chicken pecan salad with a strawberry parfait for dessert. This was a special dessert to celebrate Cathy’s birthday.

The club will be reviewing the by-laws with the idea of changing the roles of some of the officers.

Because there were only two putting days in the past six weeks due to overseeding, there were no awards announced at the luncheon; however, there were two ladies who got holes-in-one on the Mystery Hole. Nancy McDaniel and Janet Wegner will each receive $5 for their achievement.