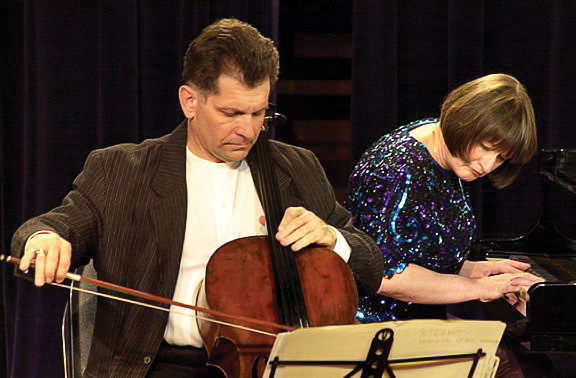 Sanda and Harry Clark are world-renowned classical musicians, now retired and Green Valley residents. On June 11 Sanda and Harry performed live at the Madera Clubhouse as a fundraiser for the Democratic Club of Quail Creek. And what a fabulous event it was!

Known as the Clark-Schuldmann Duo, residents of Green Valley were treated to a live concert by the critically acclaimed duo of cellist Harry Clark and pianist Sanda Schuldmann. Having performed together for over four decades, they achieved national acclaim for their performances across America and abroad, including many recordings and premieres of hundreds of works composed for them. They are co-founders of Chamber Music PLUS, with a history of some 600 concerts featuring more than 2,500 works performed throughout the U.S. at major concert venues ranging from Carnegie Hall to the Library of Congress.

While the Clarks have played together in many of the great concert halls around the world, their love story began decades ago when they met as young college students at the University of Texas. Harry grew up in Tucson, but Sanda had grown up thousands of miles away in what was then behind the Iron Curtain, Romania. As a young child, Sanda never dreamed that she would have a chance to live in the United States and play for audiences great and small. She said, “The opportunities that came my way in this nation were greater than I could have ever imagined.”

Like many of us, Sanda and Harry love living in Green Valley. Sanda said, “I was able to live my dream as a concert pianist, but my greatest thrill was becoming a citizen of the U.S.”

In retirement, Sanda felt that she wanted to do something more to give back to her country. “I am doing one of the most American things possible—running for public office.” Sanda is a candidate for the Arizona State Legislature. If elected, she would be representing the newly formed District 19.

The Clarks donated their time and talents for the June concert, which was a kick-off for the Democratic Club’s summer fundraising. The Democratic Club of Quail Creek would like to thank them!

More information about the Democratic Club of Quail Creek and future events and programs can be found on the website www.qcdemocrats.org.