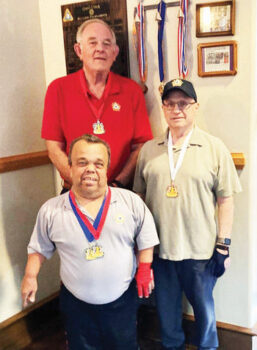 Dennis Desmond, tournament chair of the Quail Creek Billiards Club (QCBC), congratulates medal winners and other QCBC members who participated at the Tucson Senior Olympic Festival on Jan. 25. The event was held at Pockets Billiards in Tucson, and the game of 8-Ball was played. Contestants in the 37th annual Senior Olympic Festival were 50 years and older and competed in five-year age groups. Three QCBC members were medal winners: Mike Ohrel won gold, John Andersen took silver, and Jim Gaines came home with the bronze medal. Desmond has been excited about the tournaments that the QCBC traveling team has been playing this past fall and winter with other clubs in Southern Arizona, and he looks forward to future challenging tournaments for the team this spring. The team is very competitive, while still enjoying the game of pool.