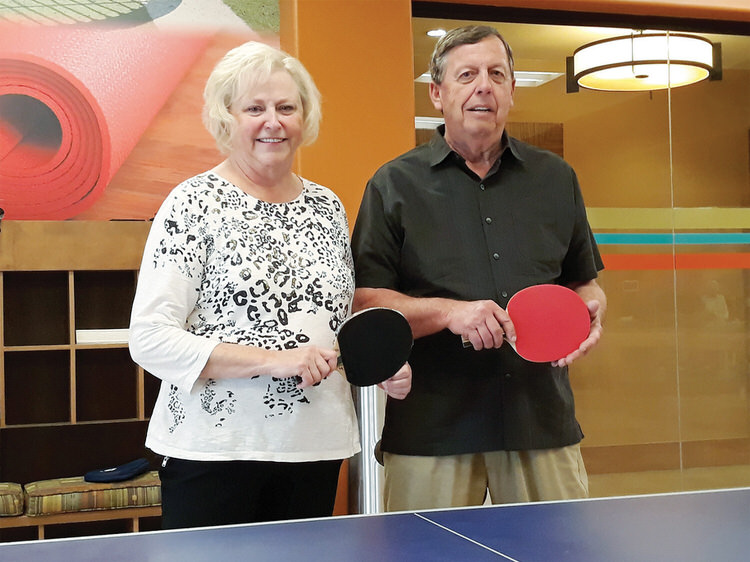 This month features Barbara Lentz and Steve DeLauro. Barb is a longtime Quail Creeker, but a brand-new table tennis player. She moved here from Washington, D.C., in 2007, working in the world of finance and administration. She retired as the chief operating officer of a publicly traded insurance brokerage. Prior to that, she worked in the nuclear energy field, which may explain her glowing personality!

Barb played many sports and was inducted into her high school athletic Hall of Fame in 2002. She loves entertaining, traveling, cooking, watching football, swimming, and fishing. Familywise, she says, “I have three step-children, all daughters, and two grandchildren: Milo who is 9 and Amos who will be 4.” Barbara says, “The people who play ping pong are friendly, and I love the competitiveness of the play. We share plenty of laughs, and all are good sports! Two female friends encouraged me to become involved, and I really enjoy playing, although still a beginner!”

Steve and his wife of 51 years, Kim, have been Quail Creek residents for over a decade and hail from Northwest Indiana. Steve was a carpenter in the steel mills for 34 years. He is a fun competitor and enjoys being with the people in the club. Asked how he got interested in ping pong, he said, “I spent a lot of cold, snowy winter days in Indiana playing table tennis in my basement. There wasn’t much else to do!” Steve also enjoys playing pinochle regularly and an occasional round of golf. While table tennis is great for his eye/hand coordination, he likes observing how each player competes with his or her own style. The couple has 14 nephews and nieces, and they have had many dogs as pets over the years.

Table Tennis Topics: Most older players learned how to play the game with paddles that had rubber pimples, or “pips,” over a wooden paddle.

These days, many younger players have learned to play with smooth rubber that has inverted “pips” with a layer of sponge rubber between the wooden paddle and the inverted pips. The newer paddles can help apply spin and complements a more offensive game than in the past with simple pimple paddles. A decent sponge rubber paddle can cost between $25 to $100, depending on the level of competition. World-caliber players buy their rubber by the individual sheet and change them frequently.