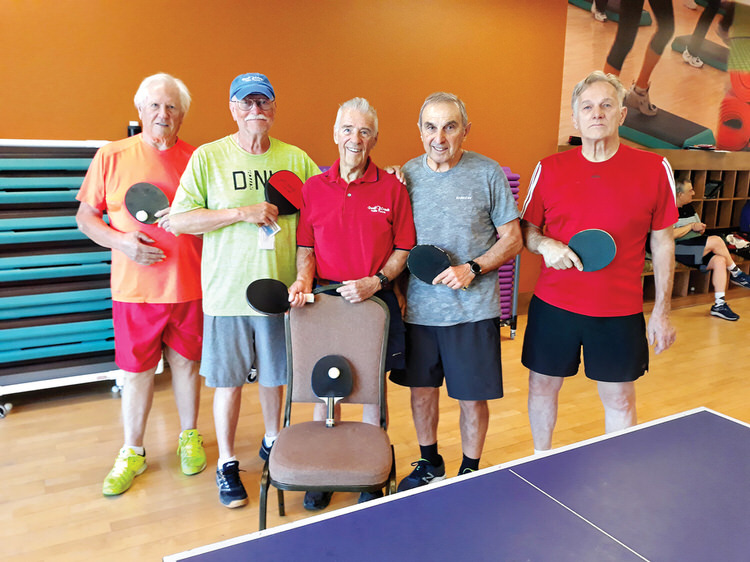 This month chronicles and shows appreciation to the founders and past leaders of our Table Tennis Club, beginning about 2004 or 2005. It all began when Lewis “Lew” Farmer and Heinz Wilhelm had a single table set up in the Madera clubhouse ballroom. Farmer and Wilhelm attracted two other players early on, Jeff Morrison and Jerry Sbarra. These four men and others grew table tennis’ following, and the club eventually moved to Anza about 2012. Sbarra and Morrison are talented instructors who helped develop several current players’ skills, promoted the club, and were instrumental in acquiring four professional-quality tables. Sadly, we lost Wilhelm in 2021, but all the others are active players. Sbarra is still our highest-ranked resident/member in the U.S. Table Tennis Association.

Farmer had been a chemist with the U.S. Food and Drug Administration, then with the Department of Justice as a forensic chemist for 32 years. His hobbies are extensive, including world travel, cactus and zero scaping, gardening, woodworking, cycling, fitness workouts, and science and technology.

Morrison played professional sports in the ‘60s, ‘70s, and ‘80s and retired in 1995. He worked with our U.S. Paralympic athletes until 2015. Morrison still enjoys playing with sandpaper or cork-covered paddles.

Tom O’Dierno led the club for years around the time of the move to Anza. O’Dierno is the second alternate coordinator of the club. He is also quite adept with the cue stick in the Billiards Club and is a vital volunteer in the local Touched by Cancer support group. O’Dierno retired after a 38-year career, concluding in management of Tech Services with Sears, Roebuck, and Co.

Greg Durnan is the club’s alternate coordinator and was the most recent coordinator before handing the baton to Tom Herder in 2021. Durnan was a flight instructor with Western Airlines and later an executive with Delta Airlines while living on the West Coast. A QC resident since 2005, he is competitive not only in ping pong, but also in tennis and pickleball.

Now with a roster of over 60 members, we anxiously await completion of the new Canyon Club in 2023. Then table tennis will again move to a new home. Come join us for fun, and stay tuned as we bounce and spin our way into the future. We meet Tuesdays, Thursdays, and Sundays at Anza from 1 to 3 p.m.

Table Tennis Topics: So, why are there orange balls and white balls?

While the topic is up for some discussion, orange balls are more often used in practice, training, or recreational play. White balls are generally the preferred color in high-level league or tournament play. White balls can actually be seen better on TV. There are different qualities and sizes of balls, but one of the best (and most expensive) is Nittaku 3-Star (40+), manufactured in Japan.