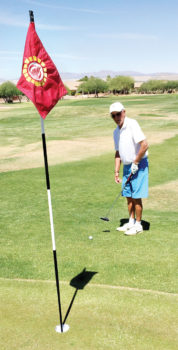 The latest edition of the Superintendent’s Revenge for the QCMGA was held on May 29, 2018. This event has pin placements on every hole located in precarious and usually unfair places by Superintendent JR Kies. If a hole could be made on the edge of the green, it was deemed to be fair play for this event. Some teams used over 24 putts to get the ball into the hole, on one hole!

This event is a handicapped four-man team Scramble. No flights. Each team player had to hit four drives. The top five teams and ties were in the money.

For such difficult pin positions, the winning scores were truly remarkable.

The following were the team winners in the money.

Congratulations to all the winners in the Superintendent’s Revenge event.