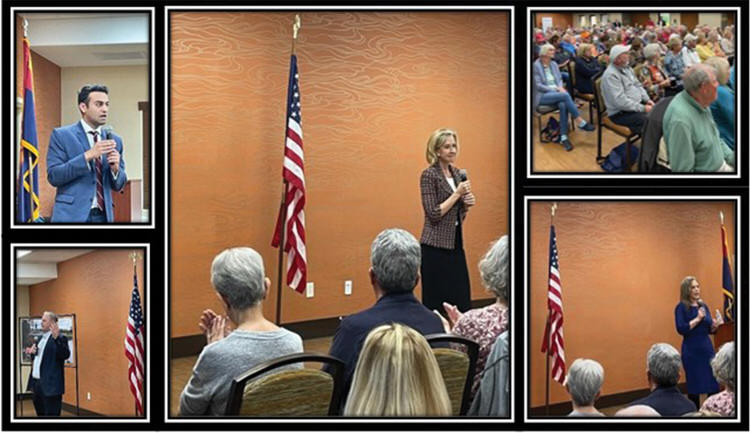 On Friday, March 18, President Rich Ulery welcomed a standing-room-only crowd of Quail Creek Republican Club (QCRC) members who took over all four rooms in the Kino Conference Center to hear from six candidates for office. Headlined by Arizona gubernatorial candidate Karrin Taylor Robson, the meeting offered each candidate the opportunity to present their qualifications and policy positions to the capacity crowd. Diane Priolo announced her candidacy for Sahuarita Town Council. Nick Myers, campaigning with team partner Kevin Thompson for the Arizona Corporation Commission (ACC), stressed the important role of the ACC in regulating Arizona utilities. Both share objectives of ensuring transparency and accountability, low and fair utility rates, and protecting consumers and businesses from California-style energy policies.

Shawnna Bolick, candidate for Secretary of State, stressed her strong support of election integrity, de-politicizing the Secretary of State’s office, and serving Arizona businesses. Abraham Hamadeh, running for Arizona attorney general, served in the Maricopa County attorney general’s office prosecuting criminals. His priorities are a secure border and demanding that our elections are conducted freely, fairly, and without fraud or abuse. He is a strong believer in securing our streets and supporting law enforcement.

Finally, Karrin Taylor Robson, Republican candidate for governor, is a small business owner knowledgeable in land use law. She is a conservative champion. Her priorities are a secure border and defending the vote by ensuring Arizona elections are easy to vote and hard to cheat. She also is a strong protector of the Second Amendment, school choice, and right to life. Ms. Robson fielded several questions from the audience. We were also honored to have her husband Ed Robson, developer of Quail Creek, in the audience.

Other community leaders, Sahuarita Mayor Tom Murphy, Vice Mayor Kara Egbert, and Sahuarita Police Chief John Niland, also attended the meeting. They, along with members of the QCRC board, participated in a roundtable discussion with Ms. Robson following the meeting.

The Quail Creek Republican Club continues to bring candidates to our community, giving all our attendees the opportunity to be informed voters in the Aug. 2, 2022, primary election. The next meeting of the QCRC is Friday, April 15.