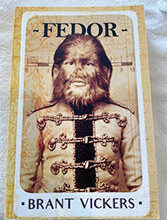 Life’s surprises are illustrated well in Brant Vickers’ novel Fedor, and such surprises hold the key to the book’s appeal. Based on the life of a sideshow that performed in P.T. Barnum’s Circus in the late 1880s, Fedor Adrianovitch Jefticheff has long, thick, silky hair all over his body, just like his father—a malady we know today as hypertrichosis. In his time, Fedor works as a freak and is promoted as a marauder and animal killer. Known as Jo-Jo the dog-faced boy, he and his father’s act attracts people from all over Russia and Europe. One day, Nicholas II, the future emperor of Russia, who is the same age as Fedor, visits the circus along with the royal family. They don’t believe the stories that the circus manager tells them about Fedor and his father. When Nicholas asks what they eat, Fedor quietly whispers in German that he likes borscht and kotlety the best. This signals the discovery that the infamous dog-faced boy is educated and that he has more to offer than just being a human curiosity.

Brant Vickers’ Fedor is a magnificent fictional biography. It tries to stay true to the details of Jefticheff’s life, and Vickers’ creative license makes it blossom so that you read about Jo-Jo not as a human curiosity but as a human being with hopes and dreams of his own. And with prominent nonfictional characters appearing in the story, their distinct personalities are well presented by the way Vickers makes them speak. Jo-Jo’s conversations with society’s A-listers give you a front-seat idea of how he manages to do well for himself as you come to understand the level of his intelligence. One of the touching highlights of this story is his encounter with Krao Farini, a Siam-born woman who has the same medical condition and who is equally intelligent as Jo-Jo. Fedor is an involving and beautiful story—one that will appeal strongly to your intellect and emotions. It makes you feel secure in your own skin, yet at the same time, reminds you that what is between your ears is far more important than what you physically present.