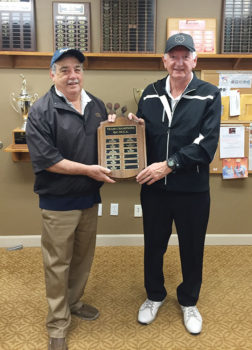 The major golfing event in January for QCMGA was the two man team championship. This is a partner event where the best net ball for each hole is counted over 54 holes. As a three day event there is ample time for things to go wrong for the two partners which hopefully does not occur on the same hole too often. In 2017 there were six flights with either seven or eight teams in each flight. Flights were established based on the total handicap index for the team with flights created from the lowest handicap indices to the highest. All three nine hole courses were used for this tournament.

Flight winners are decided by the smallest of numbers – usually only one or two strokes – a putt made or for the also rans – a putt or two slipping by the hole. Unlike prior years, the weather was not a factor. The wind stayed down and the sun shone for the three rounds leading to low scores.

The overall winners this year were the team of John Soderberg (65-72-74) and Neal Smith (67-68-67) from the third flight who scored a winning total of 183 – 33 strokes under par. The runner-up team was Dan Rasmussen and Vance Grosse from the first flight with a total of 186.

Here are the flight winners from all six flights: