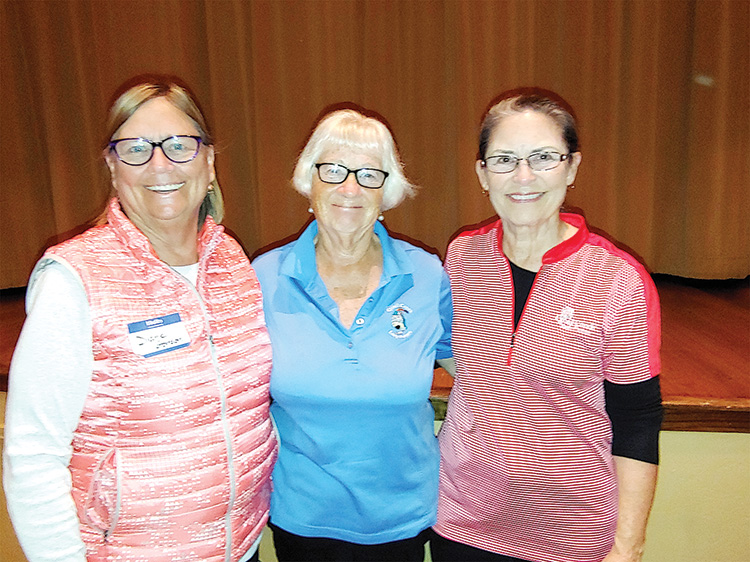 From left to right: Diane Gordon, Sally Newton, and Lynda Pilcher were the first money
hole winners of the new year. Photo by Sylvia Butler. 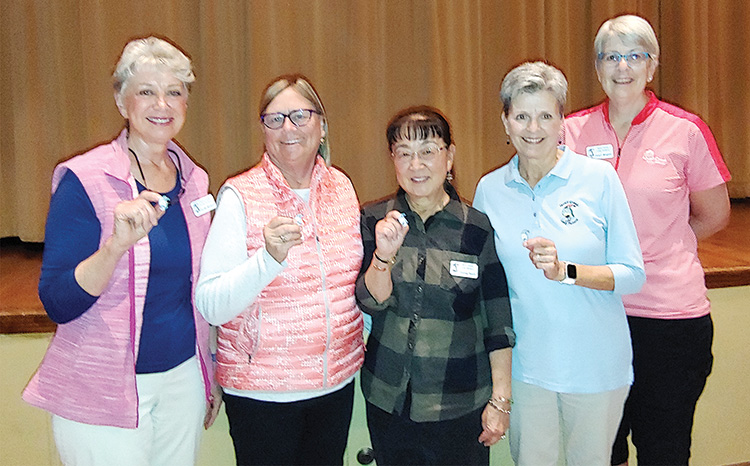 Getting 5 holes-in-one for the first time in one putting session were (left to right):
Chaille Womack, Diane Gordon, Joanne Nash, and Lou Moultrie shown with Putters
president Janet Wegner. Photo by Sylvia Butler. 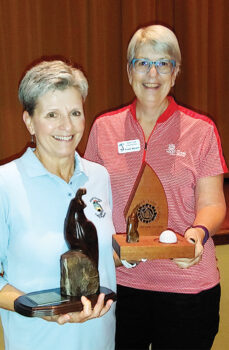 Janet Wegner congratulates Lou Moultrie
for getting both the low gross and low net
scores during the same period. Photo by
Sylvia Butler. 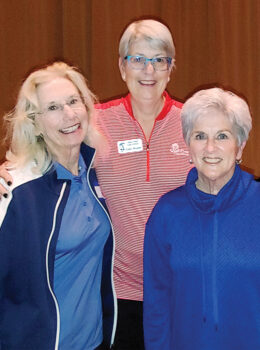 New members Hope Goetz (left) and Vicki
Struve (far right) are congratulated by
Janet Wegner (center) for getting a score
under 40 during their first month with the
Lady Putters. Photo by Sylvia Butler.

January has seen some below average temperatures with lots of frost delays on the golf course, but that hasn’t kept the Lady Putters away from the putting green. After putting on January 22, 53 ladies adjourned to the ballroom for their first luncheon of the new year. They feasted on a healthy green salad with grilled breast of chicken followed by dessert.

While their food was digesting, the first winners of 2020 were announced. Lou Moultrie won both the Coveted Quail (low net) and Low Gross Score awards. Her low net score was 32.63 and low gross was 34.44. Diane Gordon, Lynda Pilcher, and Sally Newton each went home $5 richer for getting a hole-in-one on the money hole. Getting five holes-in-one in one outing for the first time were Diane Gordon, Lou Moultrie, Chaille Womack, Joanne Nash, and Heidi Mours. Heidi also got the most holes-in-one with 11 during the reporting period.

Those achieving a score of 40 and under without a handicap for the first time were Karen Conroy, Hope Goetz, Connie Olsen, Vicki Struve, and Madelyn Witt.

The 2019 winners were Barbara Hunsinger with a now Net score of 30.20 and Yoshie Hennessey who managed to get 74 holes-in-one during 2019.

Thirty-six ladies received gift cards valued at $7.10 each. The gift cards are awarded to those who puttedt he requisite number of times during the reporting period and who attend the luncheon.