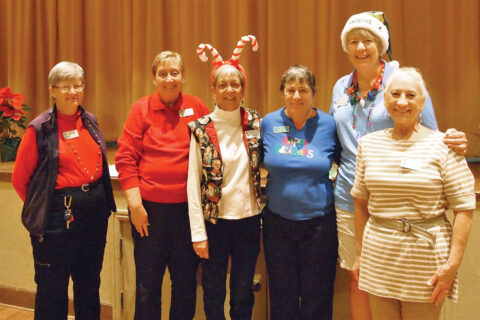 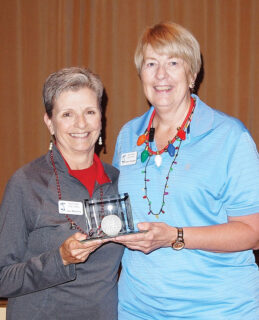 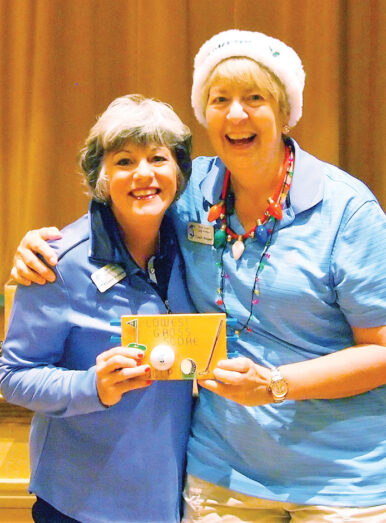 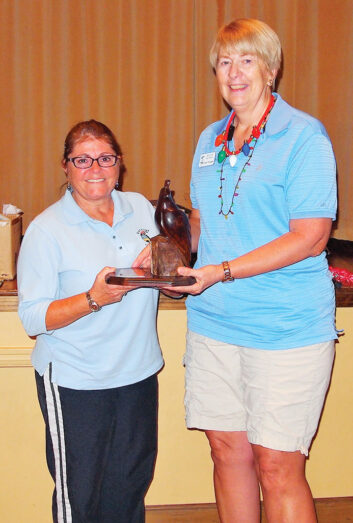 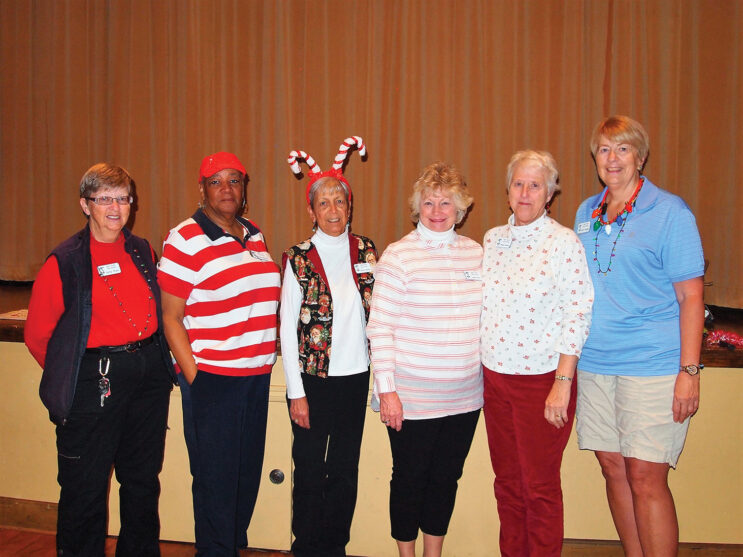 The Lady Putters dressed in red and green mark the start of the Christmas season as they enjoyed their holiday luncheon. On this occasion, they not only enjoyed themselves but also did their part to make the holidays a little more joyful for the less fortunate who rely on the Green Valley/Amado Food Bank for their groceries. The group donated 196 pounds of food. In addition to the usual staples like peanut butter, cereal and pasta, many brought sugar, flour, pie filling, candied yams, stuffing mix and other items not normally found on the food bank’s shelves. Monetary contributions totaled $475 equating to $4275 in buying power for the food bank. Vicki Turner, Operations Coordinator at the food bank, said, “Thanks so much – Lady Putters are Awesome!”

Prior to lunch being served, the ladies elected the officers for 2018 and learned who had won recognition for their putting achievements in the six weeks preceding the luncheon.

Getting a score of under 40 for the first time were Kristi Butts 35, Bonnie Branson 35, Pam Rogers 35, Coreen Williams 36, Mary Litfin 36, Peggy Brown 37, Karen Schomaker 38, Betty Levato 38, Carolyn Hart 38, Jamie Kahn 38, Barbara Manning 38, Linda Scott 39, Susan Writer 39, Arleen Kynaston 39 and Sheila Wyllie 39. The next plateau for the Putters is achieving a score of 36 (par) and under for the first time. Kristi Butts, Pam Rogers and Bonnie Branson were recognized for this achievement with their scores of 35. Unfortunately not all were able to attend the luncheon and be recognized for their achievements.

After putting and the business and awards part of the meeting, the ladies enjoyed chicken picata accompanied by mashed potatoes and green beans mixed with red bell peppers in keeping with the colors of the season. They topped off their meal with cherry cobbler with ice cream.

Everyone attending the luncheon who had putted at least four of the six weeks received a gift card valued at $10.

For more information on the group, please visit quailcreekputters.com or join us on the back patio of the clubhouse every Wednesday starting at 9:30 a.m.