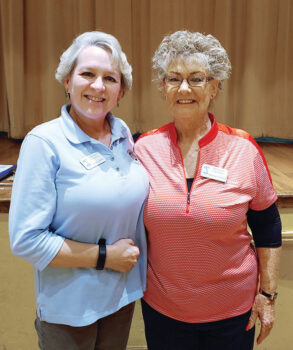 Lydia Lukins (left), shown with Sharon Schoen, was the last Lady Putter to receive the Coveted Quail before the putting green was closed in March. (Photo by Sylvia Butler)

The Lady Putters are still reporting how they have been spending their time in the seven months during which they have not been able to putt. Lydia Lukins, the last winner of the Coveted Quail award for a low net score before the pandemic hit, headed back to Washington for the summer. There she started thinking about trying real golf for the first time. Lo and behold, her husband bought her a set of clubs as an anniversary gift, and she was hooked from the start! Lydia started practicing on their community range and graduated to playing on their community course. She felt it was less intimidating to play on a quiet, smaller course. With more time on her hands, she watched videos, practiced her swing on a mat, and got pointers from her husband. She said she can’t wait to come back to Quail Creek in late October and actually play on the course for the first time in the 10 years they have owned a home here. She also feels she needs putting practice more than ever.

Judy McKinley decided to try her hand at rock painting, which she reports has been lots of fun. She had a lot of latent talent in her since her rocks look almost like Cloisonné with the attention to small detail.

Cathy Thiele reports she has been living life as normally as possible, with the only exception being that she has been wearing a mask while doing it. She golfs two to three times per week, goes out to lunch, plays cards with some friends—with masks and lots of hand sanitizer. She admits she has binge watched Netflix, played computer games, watched TV, completed some jigsaw puzzles, and gone shopping.

She is hoping to go to Las Vegas for Thanksgiving to meet with family, do some gambling, and maybe even take in a show—if there is one to see—following CDC guidelines, of course.

Another Putter said she decided to grow her own veggies when the local Farmers’ Markets closed. Alas, the javelina, flat tailed ground squirrels, and birds, ate the fruits of her labor. Now all she has are pots full of dirt.