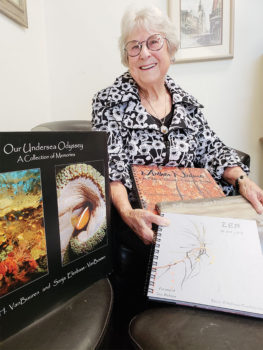 Zen in My Life and Our Undersea Odyssey are just two amazingly beautiful works by Sonja VanBuuren, among the schools of underwater photographs and arrays of natural glimpses into our planet that this socially-enlightened, world-class writer/photographer has bestowed upon viewers and readers for over three decades.

Growing up in the Dutch East Indies, a colony of the Netherlands, (now Indonesia), Sonja realized much later in life that she grew up without books! Sonja was eleven when the Japanese had closed the schools on the islands, but soon after the war, her family migrated to Holland where she was determined to get a high school education and did so in three years. By way of Africa and Europe, Sonja came to the United States where her world changed from single to married and the future held promise and excitement as she began learning as much as possible about photography from her cinematographer husband.

As time and curiosity would have it, under the sea became as fascinating as above, and the unique, so-in-love couple would explore its depths, its life and its promise through the perfected lenses of their underwater cameras. In their early fifties and SCUBA certified, the window to the floor below them opened and a dark watery world became their living room and their oyster. As they travelled the world in the ‘senior’ phase of their lives, the corners of the earth became the corners around which were endless realms of secrets waiting to be visualized by their cameras and their hearts.

And then through the sands of time and the magnified blaze of the Southwestern sun, the desert called. And with as much dignity and drama and through their beloved eye piece, came myriads of miraculous and astounding moments of arid days and star-filled nights in their beloved desert retreat in Arizona. Never had the camera found so much to catch, and so much to share above the ocean as when Sonja and Jan began looking at the entangled cactus, the vivid flora and the connectivity of life to its environment as when Arizona became their quiet place of compassion and contentment. The stillness of the reflective Southwestern spirit became alive and in focus and the art of creating art from photographs began to unfold. Sonja and Jan’s books were beginning to take on their own lives of transition and reflection and carefully chosen photos turned into prized and treasured works.

Lives not just lived, but well-lived and graciously-shared, Sonja and Jan were to become an institution for the joy and harmony of art in all of its forms. With Jan’s passing, Sonja continued offering rare glimpses into their photographic libraries sharing their art with hospitals through framed ‘windows’ into the serenity of the universe and beautifully constructed books capturing personal moments of not only the past but also the future.

When asked what her philosophy of life is and how it has developed over her lifetime of ninety years, Sonja answered in her own quiet and peace-filled way, “I have evolved.”Her art is now our art and her windows are now open through which we can all learn to focus on the beauty and the balance of our incredible world. Thank you, Sonja and Jan.

For more information about how you, too, can enjoy Sonja and Jan’s work, contact me at [email protected]