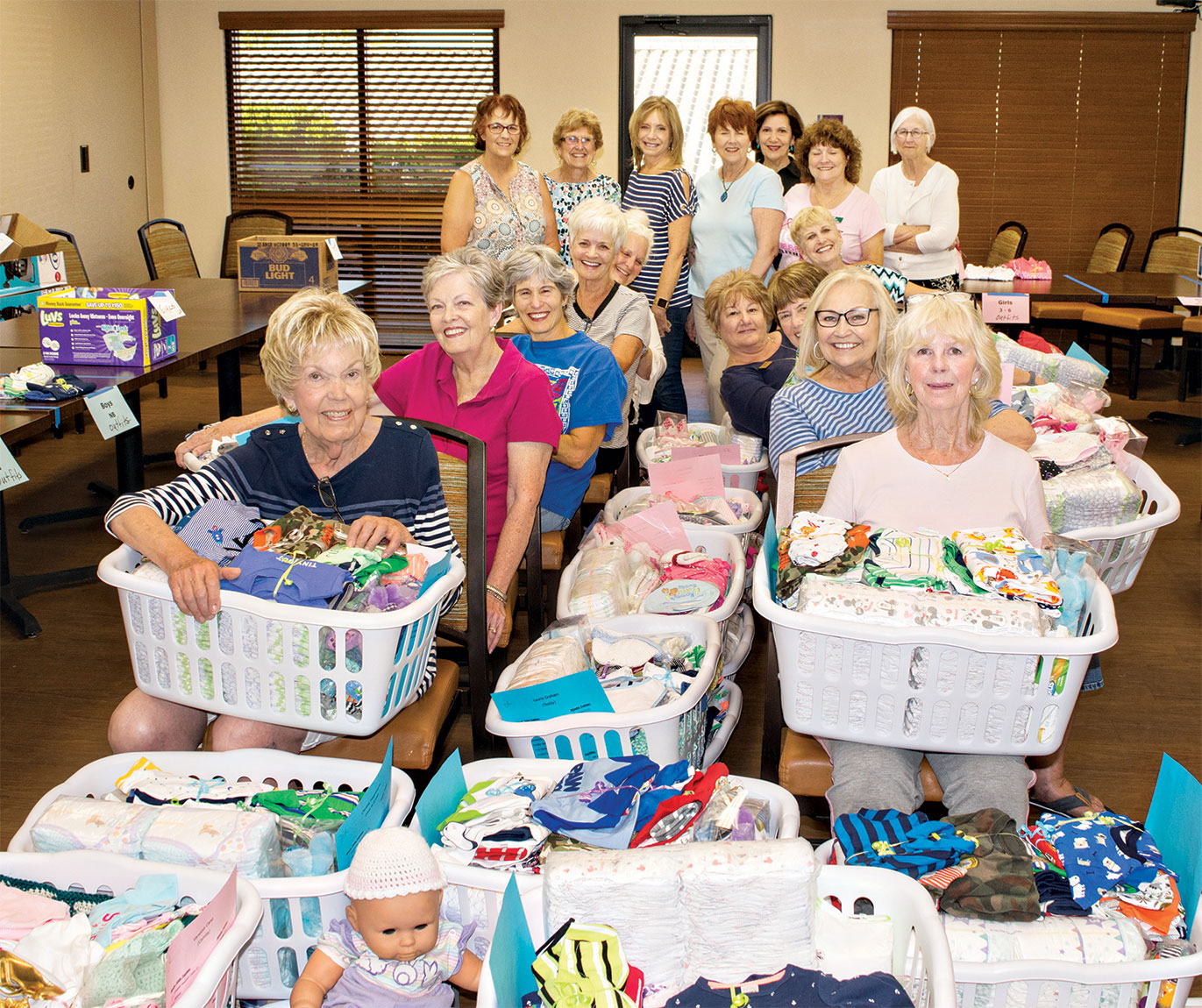 The dining hall at the 162nd Air Wing of the Arizona National Guard sparkled with smiling moons, cuddly stuffed animals and pastel-colored balloons as twenty-eight mothers, along with fathers, family members and babies were treated to a “blow-out” baby shower on May 19. The military-service parents enjoyed a Mexican-style lunch and then competed for prizes including strollers, a diaper cake (dozens of disposable diapers stacked and decorated like a multi-layer cake) and two “guess the amount” coin banks, each containing hundreds of dollars to begin an education account for their newborn child. Raffles of a “Love You to the Moon and Back” handmade quilt, christening gowns, and a Pack ‘n Play were also popular.

Each mom was given a diaper bag, a “mom’s bag” of personal items and a laundry basket loaded with dozens of diapers along with handmade items such as crocheted and knitted blankets, hats, shopping cart covers, bibs and baby bath items. Sue Ann Obremski, a baby shower committee member, personally created over 950 items, including the two heirloom-quality christening outfits—a delicate snow-white dress for a girl and a dashing white suit for a boy. Ruth McDermott, another baby shower committee member, donated adorable animated stuffed animals and wrote a personal note to each of the winners.

The Women of Quail Creek were joined by General Andrew MacDonald and his wife, Rosalyn, in welcoming the newest additions to the Air Wing family and assisted with handing out gifts. Barbara Gavre, 162nd Wing Family Readiness Program Manager, acted as liaison between TWOQC and the Air Wing.

Although the military baby shower is organized and carried out by the 20+-member TWOQC Baby Shower Committee, chaired by Kathi Krieg, it represents the generosity of not only our entire Quail Creek Community but also members of the greater Green Valley/Sahuarita area. Unit parties collected thousands of disposable diapers and individuals donated hundreds of baby outfits including “onesies”—little t-shirt/diaper-cover combinations—as well as boys’ and girls’ play sets, sleepwear and children’s books. Many monetary donations, both from cash solicitations at QC concerts and from checks dropped off at the Concierge Desk helped fund items that were purchased to make sure each family received their share of gifts.

To all who helped, thank you! As one young father said, “This is so awesome. I can’t believe you did all this for us.” To which a Women of Quail Creek volunteer replied, “It’s our pleasure. We can’t possibly thank you for all you do for our country, but this is a start.”