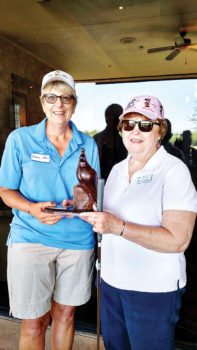 The Lady Putters celebrated recent victories at a luncheon on April 17. A relative newcomer to the Putters, Peggy Wynkoop earned the Coveted Quail with a Low Net score of 31.06. Jan Ederle earned two awards, Low Gross Score with 37.25 and the crystal golf ball for getting 12 holes-in-one during the previous six-week period.
Money Hole winners included Janet Wegner, Kimberly Nichols and Wendy Van Dyke. Each won $5 for getting a hole-in-one on the Money Hole, the most difficult hole during the weekly challenge.
Linda Hunnicutt scored under 40 for the first time with a 37 while Heidi Mours, Jan Ederle, Marilyn Burkstrand and Terry Ramsbottom each got five holes-in-one in a single outing.
The weather was picture perfect so the ladies ate on the Madera Clubhouse patio enjoying a celebratory petite flank steak lunch topped off with a yummy lemon tart for dessert.