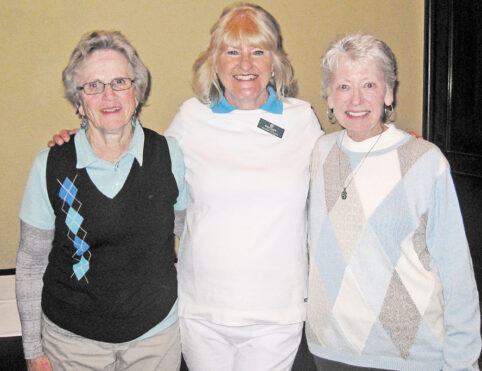 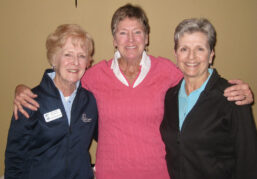 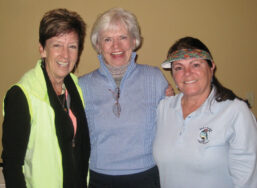 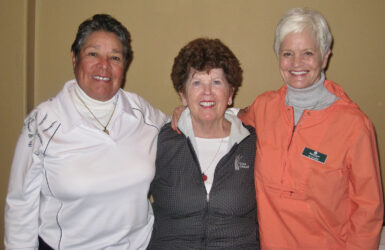 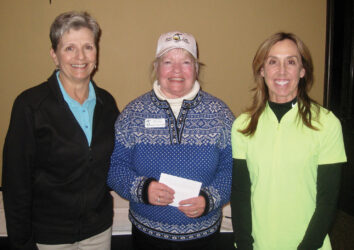 Thursday, January 19; it is 8:00 a.m. and it is cold, very cold. There is a slight wind coming across the community from the snow covered mountains. Despite the early morning hour, despite the weather, 93 women from Quail Creek’s three golf organizations (QCLGA, QC9LGA and Putters) gathered at the Madera Country Club parking lot for a shotgun start to a unique round of golf. Organizers call it “Girls Just Want to Have Fun.” And that they did.

Organizers Nancy Hoppe, Shirley Gray (pairing), Cathy Thiele, Cheri Sipe (luncheon) and Sherry Gall orchestrated an outing that put together one person from each organization as a three person team, two teams per hole. The unusual pairings allowed players to interact on a social basis. No competition among the organizations. The only competition was from one’s self—to do your best for your team.

Perhaps the person most personifying the spirit of the day is Joann Salazar. Joann is the QCLGA (18) assigned to play with Marilyn Beim and Kathy Guy. Unfortunately, the QCLGA assigned to the companion team of Sharon Paxson and Carol Jackson was AWOL, so Joann played the round for both teams. No favorites; she did equally well for both teams and was duly rewarded when both teams finished in the money. Kudos to Joann.

Following a delicious lunch of a bread bowl filled with warm tasty soup, salad and dessert, the president of each organization Chris Gould, QCLGA; Cheri Sipe, QC9LGA and Cathy Thiele from Putters, spoke words of appreciation to committee members whose efforts made the event a success. There was a resounding applause and agreement from the gathered and finally warmed players.

Closest to the Line – Lou Moultrie

Closest to the Pin – Amy Carmien

Congratulations to the winners and the organizers who made the event memorable.