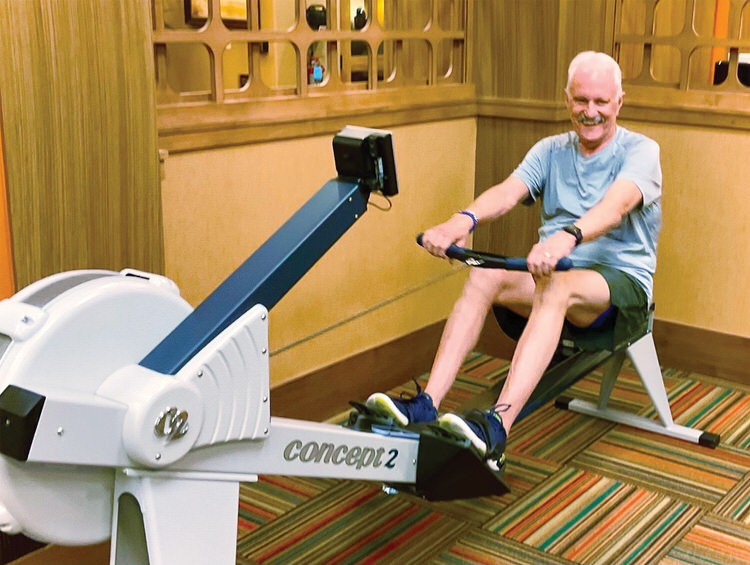 If you exercised at the Anza Athletic Club before 2020, you would always see a smiling athlete named Michael (Mike) Vance. Then he disappeared, and his workout buddies assumed it was due to the pandemic. What a jaw-dropper when we learned what Mike survived …

His journey began after an emergency bowel operation in December, 2019. After Mike recovered and resumed normal activities, he experienced shortness of breath. He said, “I couldn’t keep up on the golf course or function at the gym, including karate practice.”

Seeking answers from doctors, tests were negative for any virus or infection. “My doctor surmised I contracted pulmonary fibrosis, recommending a pulmonologist.”

Mike and his wife are snowbirds. Back in Washington, a pulmonologist confirmed the Arizona doctor’s suspicions: idiopathic pulmonary fibrosis, which is an unknown cause of scarring on the lung tissue. Possibly during the December operation, Mike aspirated bile into his lungs, causing fibrosis. “She said there is no treatment or cure besides a double lung transplant. Without the transplant, I only had a few years. With the transplant, people have lived 10 years or longer.”

Arguably the best transplant hospital in the country is Dignity Health Norton Thoracic Institute in Phoenix. In October, 2020, Mike returned to Arizona to undergo a year of evaluations. “They not only tested my lungs, but every bodily function, including brain, heart, and stomach, to ensure my ability to survive the operation. The good news is, I was deemed an outstanding candidate for the transplant.” During this year, Mike’s lung function continued to deteriorate.

Mike was then put on the donor list. In Arizona, the wait time is usually 17 to 20 days. Added on a Friday, Mike was called Sunday evening.

The surgery was performed on Monday. “After one week in ICU, I spent two months in the transplant center. My vocal cords were damaged from the breathing tube. Furthermore, I was unable to swallow properly, so they inserted a feeding tube.” During a subsequent procedure called a bronchoscopy, which checks for rejection, the doctor nicked the wall of Mike’s lung, and it collapsed. A tube was inserted through his side to fill his lung with air.

After Christmas in 2021, Mike was released from the hospital but stayed in Phoenix in case of complications. Two months later, he and his wife moved back to Quail Creek. “We still had to drive to Phoenix for checkups.

“For rehab, I immediately headed to the Anza gym. I needed to see if my evening workout friends were still there, and they were! It was great to be welcomed back and receive the encouragement I needed.

“We are really blessed to have a quality facility in our community. It has everything necessary for my recovery plan. Besides being perfect to stay in shape, there are other residents rehabbing from injuries. Try coming in the evening—there are less people, less intimidation, and camaraderie!”

If anyone would like to inspire others by sharing their rehabilitation journey, please contact Kathi Bobillot at [email protected]