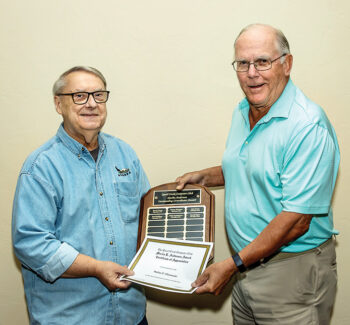 The Quail Creek Computer Club held its monthly general meeting with a presentation and talk on Nov. 23. At the meeting, the Merlin Anderson Outstanding Contributor Award was given to Walt Obremski. This award, approved by the board of directors, recognizes significant and extended contributions to the Computer Club. Contributions should include working in the open labs, being a class instructor or a monitor, and acting as an officer or chairperson of the club for multiple years. Walt has served three previous terms (six years) on the board of directors before retiring a year ago. Walt has been a monitor in the open labs for many years and was instrumental in installing the security system now used in the CATC building. Walt was present and was given a certificate by Steve Sanford, current president, recognizing the award, and Walt’s name is engraved on the plaque.

Following the general meeting, John Dwyer presented a talk titled, “What You Should Know About Windows 11.” John discussed the standard requirements for the new Windows 11, along with answering the question about whether specific current computers can be upgraded. Following the presentation, he took questions from the audience.

On Jan. 15, the Computer Club will hold its annual Open House from 10 a.m. to 2 p.m. This will be an event for all residents of Quail Creek. Those not familiar with the Computer Club can meet with board members and monitors and learn about the courses, open labs, and help sessions that are offered. They can also register to become a member and pay dues. Returning members can learn what is new for the year and pay dues for 2022. All members, new and returning, can sign up and register to win a door prize. This year, there will be drawings for nine gift certificates from Amazon—you do not need to be present to win.

The next general meeting of the Computer Club, open to all, will be Jan. 18 at 7 p.m. in the Madera Ballroom. The Budget for 2022 will be presented to the membership for approval.

If you are interested in learning more about the Computer Club, go to our website at quailcreekcomputerclub.org and click on the “General Info” button. To see a calendar of current classes, click on “Education.” To speak to someone about the club, come to the lab in the CATC building during open lab hours (which are listed on the website calendar). Dues are the same for one family member or two; only $20 per household for the calendar year.