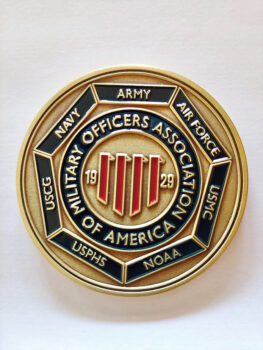 Front and reverse sides of coin. (Photos by Peggy McGee) 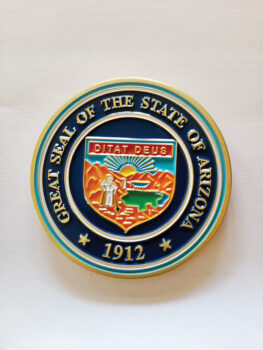 Front and reverse sides of coin. (Photos by Peggy McGee)

Every year, the Green Valley Chapter Military Officers Association of America (MOAA), Green Valley Chapter, awards scholarships to graduating cadets from Sahuarita, Walden Grove, Rio Rico and Nogales High Schools and recognizes outstanding cadets at the end of each academic year. Despite the many challenges they have faced this year, and after a slow start, the cadets learned a lot and participated in competitive activities as much as possible during the school year. The cadets were awarded specially designed coins in recognition of their achievements.

Each year, one member from each of the first three years of the Naval Junior Reserve Officer Training Corps (JROTC) and all four years for the Army JROTC are recognized for their overall academic performance, drill precision, military bearing, and leadership abilities. Because of COVID restrictions, there were no large public gatherings to honor these outstanding students.

These outstanding teens are self-disciplined and set the example for other youth to follow, showing respect for authority and love of country at all times.

Unfortunately, because of COVID restrictions, the Air Force JROTC unit at Nogales High School was not able to have any type of competitive events during the 2020-21 school year.

The MOAA Chapter is taking a summer break. They will open the fall season with a luncheon at Quail Creek on Sept. 14.