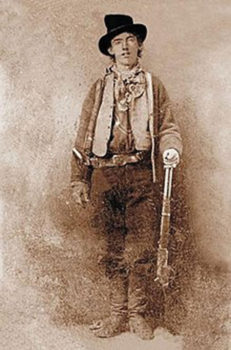 Wild West, Series III, The Lincoln County War will be performed Monday, February 26, 2018, at 6:00 p.m. in the Madera Clubhouse Crystal Ballroom. Tickets are $7.

The ballroom at the Madera Clubhouse will host another in the popular series presented by Scott Dyke, historian, western writer and lecturer. The Lincoln County War is scheduled for Monday, February 26 at 6:00 p.m. Dyke will be joined by Tucson Attorney Robert Palmquist, who also conducts western history classes at Pima Community College.

The Lincoln County War spawned the legendary Billy the Kid, “We will give you the history of this significant fight and examine the causes. Dyke commented, “Politics and power clashed in New Mexico Territory. There are many murky twists and turns in this story. We will trace its beginnings and continue forward to its conclusion, highlighting the many characters that were interwoven and examining the myths that still exist—and the story does not end with The Kid’s demise.”

Dyke has received several state-wide awards for his column Meandering the Mesquite He also is a well-known expert on Tombstone and Wyatt Earp. The presentations previously covered the Gunfight at the OK Corral and the Battle of the Little Big Horn that enjoyed sell-out crowds.

Tickets, on a first come basis, can be purchased at QuailCreek.ShoWare.com.