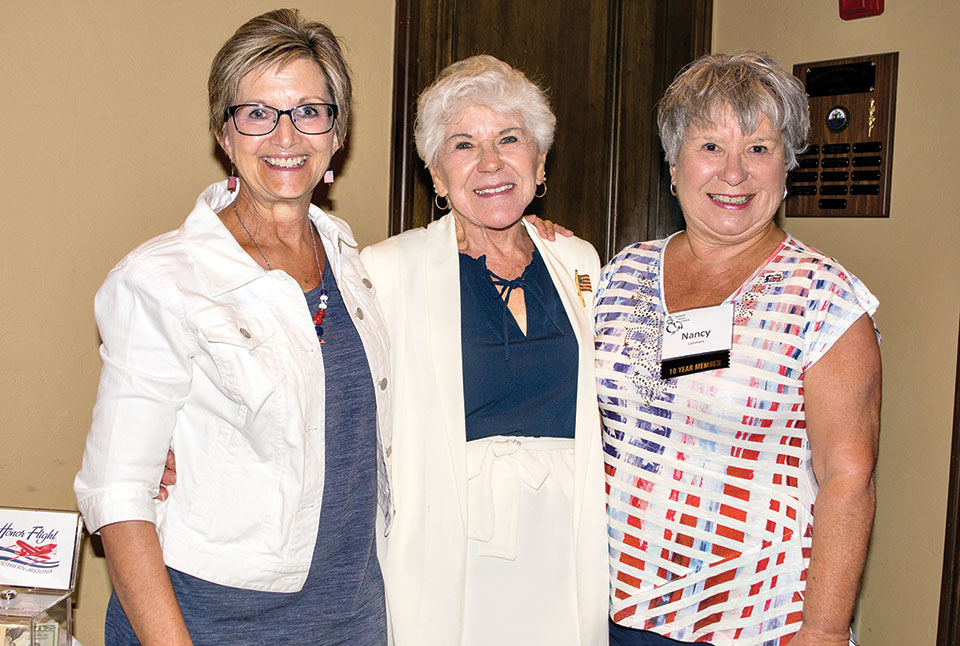 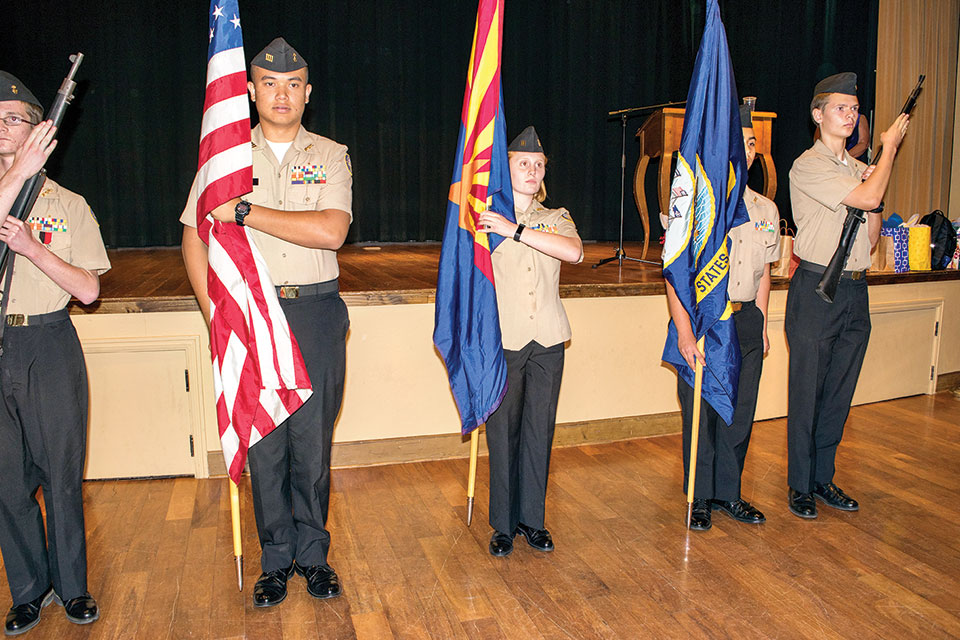 Cadets prepare to post the Colors; photo by Eileen Sykora

May is traditionally the month when we honor our nation’s veterans. To help TWOQC have a more meaningful May meeting, the Sahuarita JROTC posted the Colors at the beginning of the meeting.

The speaker, Jan Haeger, joined the Navy at age 18 to see the world, but alas, Navy policy said she could not serve overseas because she was not 21. That did not stop her from getting out of the U.S.A. As a corpsman, she volunteered to go on flights that transported troops wounded in the Korean conflict back from the war zone to military hospitals in the United States. She could never serve more than a week in the theater of war but she did manage several five-day stints helping the wounded.

The youngest of seven children from Pennsylvania, her family was unable to afford to send a child to college so she felt joining the military was the way to get a free education. She said the Navy was like family in which the members took care of one another. Jan talked about the benefits that military service can offer men and women: marketable skills, learning true team work, responsibility.

A very spry 82 year old, Jan was delighted when she shared a room with a 94 year old Army World War II veteran when she went on an Honor Flight in May 2016. She said the Honor Flight was a wonderful experience giving the veterans a chance to reconnect with others who had gone through similar circumstances.

Kathy Mansur, representing the Southern Arizona Honor Flight program, announced that the next Honor Flight will be a charter flight to be held in September. Seventy-five World War II and Korean War veterans will be able to make this trip. The Honor Flight program relies solely on donations to keep the program going. The roundtrip flight from Tucson to Washington D.C. includes the hotel and all meals and costs the veteran nothing. Guardians who accompany the veterans must pay $1000 to participate in the program. Kathy said that mail-call when the veterans are presented letters from not only family members but school children and people from the local community is one of the favorite parts of the program. Keep an eye out on What’s Happening for details on how one can write letters to vets to thank them for their service to our country. She said many of the WWII veterans believe that people have forgotten about what sacrifices they made during the war so the letters become a true keepsake.

Anyone who served during WWII or Korea, even with stateside duty, is eligible to go on the Honor Flight. Applications are available at honorflightsaz.org. Those interested in supporting this worthwhile program may go to the same website to make a tax deductible donation.