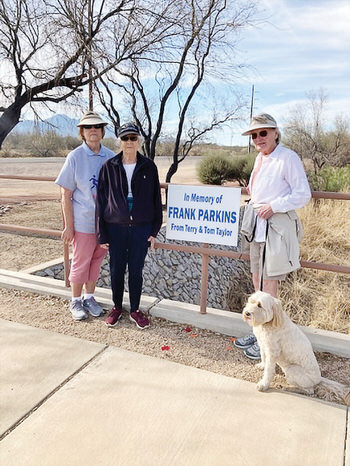 Left to right: Quail Creek residents Diana Averill, Marge Parkins, and Terry Taylor, along with dog Heidi, in front of the memorial sign for Frank Parkins (photo by Tom Taylor) 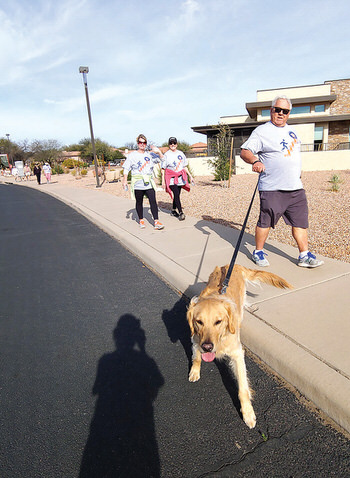 Jack Davis of Quail Creek is pulled along the route by his dog Cruz. (Photo by Peggy McGee)

Valley Assistance Services (VAS) extends its deep appreciation to the Quail Creek residents who supported their first fundraising walk on March 26. The two-mile walk along the Santa Cruz River next to the pecan orchards was held early in the day before the temperatures started to rise. Many walkers were accompanied by their dogs, providing an exercise opportunity for both.

The event started with a Posting of the Colors by cadets from the Sahuarita High School Junior Reserve Officers’ Training Corps unit, followed by a short presentation from Sahuarita Mayor Tom Murphy. Members of the Greater Green Valley Community Emergency Response Team were on hand to ensure the walkers safely crossed the roads on the La Posada campus.

Several walkers, as well as those who were unavailable that morning, made donations to honor the memory of loved ones. For their first attempt at a benefit walk, the VAS team was pleased with the outcome and plans to sponsor another walk in 2023.