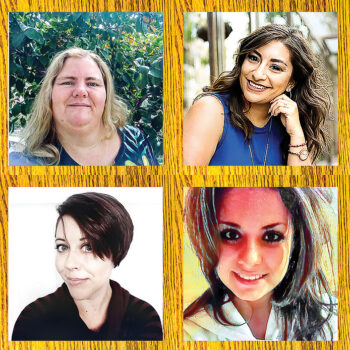 Everyone has been challenged by COVID and that includes The Women of Quail Creek’s scholarship winners. Especially hard hit were the 2020 graduates from Sahuarita and Walden Grove high schools. They did not have a prom, a traditional graduation ceremony, or a party with friends. When September rolled around, they could not attend classes on campus. Their dreams of meeting students from other areas of Arizona while attending Pima Community College (PCC) and being involved in on-campus activities were not to be realized. Despite this, these ladies were resilient and adapted quite well, most with a sense of humor intact.

They all agreed this was not at all what they expected their first year of college would be like. They had dreams to travel, study abroad, and find connections with people their age. Many friends left for other college campuses. Even social butterflies were challenged. One lamented that attending Zoom volleyball classes isn’t quite the same as being on the court.

On the academic side, virtual classes were viewed with both positives and negatives. Attending virtual classes, especially towards the beginning of the semester, was hard. Asking questions was difficult. There were technical glitches, presentations were not as impactful, and it was hard to stay focused when at home with every distraction possible.

They said they asked teachers a lot of questions and receiving a response wasn’t always timely. Time management was a worry, but the virtual and online courses, when offered, gave them more flexibility. Not having to commute to Tucson for classes gave them more usable hours in their day, since most worked 20 to 30 hours a week. In addition to taking classes, a Woman in Transition (WIT) awardee also home-schooled her three children.

Some appreciated how compassionate and understanding their teachers were. They know when students are struggling, and they are quick to help. The biggest challenge for those taking science courses was virtual labs where they had to adjust to video game like lab simulations.

Only one of the awardees reported that she was able to attend classes in person. She was required to wear full PPE, including shoe covers, hair net, a mask, face shield, gloves, and gown. Classes had groups of three or four, not including the instructor.

Despite the challenges, all of these ladies maintained high grades, and all but one will be starting her second semester in January. The other will return to school in May.

They all agreed this semester was an uphill battle, but definitely felt a sense of accomplishment at the end. One summed it up well, “I’m going to tackle the second semester with confidence, for I now know what I can accomplish even during a worldwide pandemic.” They again thanked TWOQC for their scholarship, which has eased the financial aspects of taking courses.