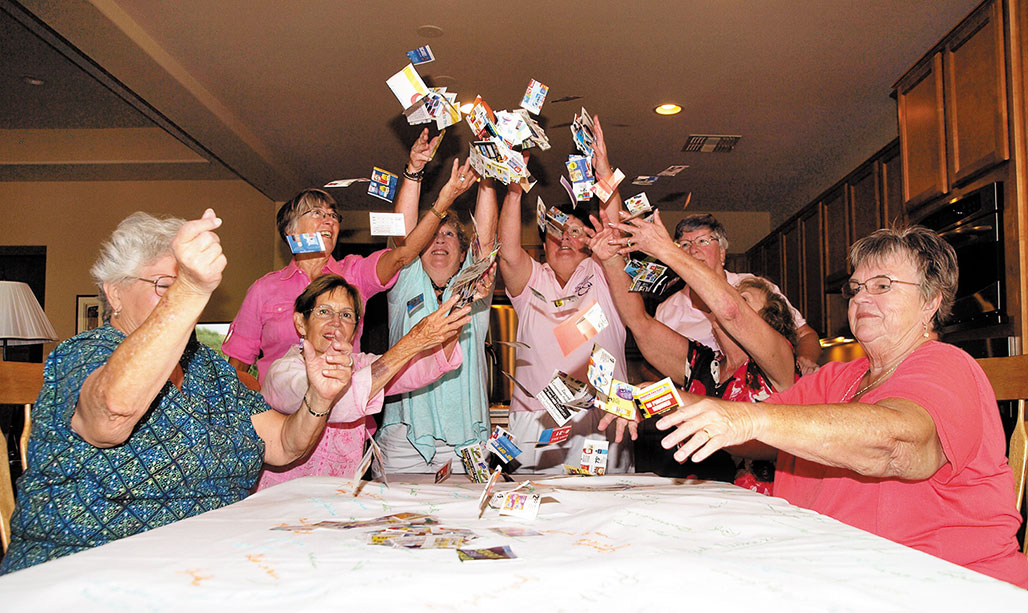 Ecstatic TWOQC coupon counters celebrate sending over $1,000,000 worth of coupons to our overseas troops.

Each month for four years dedicated members of TWOQC clipped, sorted and counted coupons which they sent to our troops in Italy and Japan. With great jubilation in August, they surpassed their goal of $1,000,000 worth of coupons sent overseas (which they had hoped to reach by October for TWOQC tenth anniversary celebration) with a total of $1,008,072 sent!

TWOQC decided in June of 2010 to participate in the Overseas Coupon Program to help military families who did not have the benefit of coupon inserts in their Sunday papers. They chose to adopt the U.S. Army base in Vicenza, Italy, to be the recipient of the collected coupons. In May 2014, they shared the wealth and began sending coupons to the U.S. Naval Base in Sasebo, Japan. The project was also expanded a few years ago to include giving additional coupons to the Air and Army National Guard units in the Tucson area.

Thanks to all of you who have helped with this project over the years clipping, sorting and dropping off your coupons for our troops. Not only is the financial benefit appreciated, it also helps our troops to know what level of support they have from civilians back home. Special thanks go to Mary Lou Kiger who started the project and ran it for two years and to sisters Lois and Janet Connell who took it over in 2012. Preparing yummy refreshments and creating a festive atmosphere, Mary Lou and later Janet and Lois hosted coupon counting parties each month making what could have been a tedious job fun for all participates.