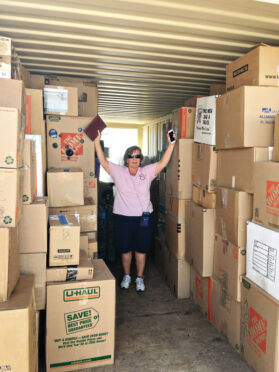 Laura Colbert, event chairperson, surrounded by some of the items delivered to the VA; photo by Jerry Colbert 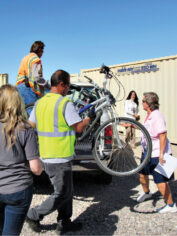 Bicycles being unloaded for donation; photo by Diane Quinn 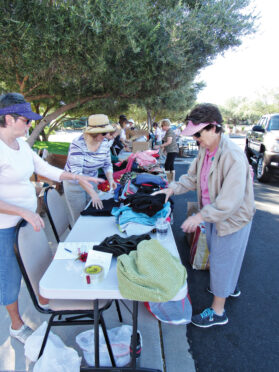 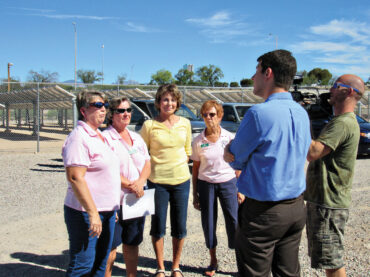 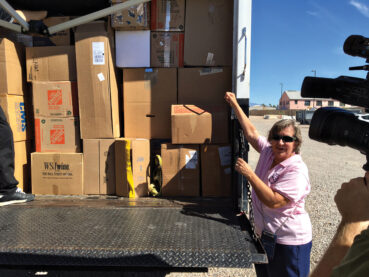 Event Chairperson Laura Colbert presents a truckload of donations to the VA; photo by Jerry Colbert

The seventh annual The Women of Quail Creek (TWOQC) clothing and household goods drive to benefit homeless veterans reached new heights on Saturday, October 15. Through the generous support of the residents of Quail Creek and the Greater Green Valley/Sahuarita area, over 7,000 items were delivered to the Southern Arizona Veterans Administration campus in Tucson on Monday, October 17.

Items donated included clothing for men and women, household items to be distributed to newly housed veterans, kitchen products for use by the newly housed and even pet products to help vets support their furry friends who are often great emotional support to the needy vets. Five bicycles were also donated, allowing vets access to transportation for job interviews and to reach much-needed services through Pima County.

Starting as early as 7:00 a.m. on the morning of October 15, an enthusiastic group of volunteers gathered to greet cars as they delivered contributions. Items were then sorted, inventoried and packed into boxes. When it was over, the Quail Creek catering truck, lent to the cause by Robson Corporation, was packed to the brim. Several other cars and trucks were also loaded for delivery. Transporting several heavy products may warrant trucks to make sure that their lift-gates are working effectively so it will be easier for them to offload their deliveries and move on to the next one as quickly as possible, (truckers can click here to learn about Lift-gate Repairs). This will help them to get more down in significantly less time. Before setting off any long journey, it may also be worth getting a full maintenance check on your vehicle so that it is safe enough to drive heavy loads.

Veterans Administration staff met the deliveries on Monday and assisted with unloading while sharing how much they look forward to this event each year. The VA is not permitted to openly solicit contributions, so they rely on groups such as TWOQC to provide items of use to the many homeless veterans in southern Arizona.

TWOQC was fortunate to receive excellent media coverage of the event, airing several times on both KOLD-TV and KMSB-TV. Laura Colbert, chairperson of the event was interviewed by KOLD reporter Craig Reck, as were several other volunteers.

Following the delivery, several representatives of TWOQC received a tour of the homeless veterans assistance offices and were able to learn more about services available to vets through the southern Arizona center.

More information and photos of this event are available at TWOQC’s website, womenqc.com.