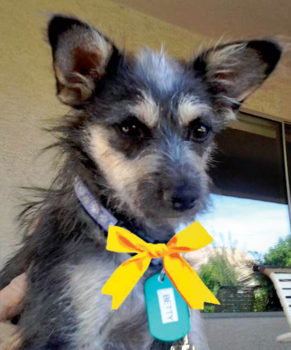 The Yellow Dog Project is a movement created for dogs that need space. By tying a yellow ribbon or something similar to the dog’s leash the owner/walker is indicting that this dog needs space, for whatever reason (or perhaps the human walking the dog—either way).

The primary purpose of this movement is to educate the general public about dogs that need extra space and how to properly approach strange dogs in general. These dogs are not necessarily aggressive, in fact, many are not. These dogs could need space for any number of reasons.

Anxiety is a big one. Many dogs get anxious in new situations and just become downright afraid and uncomfortable – it’s cruel to knowingly inflict such stress on an animal. Worst case scenario, some dogs can react aggressively out of fear, as per their natural instincts. Yellow ribbons are becoming a way for dog owners to let people know their dog might be frightened by approaching strangers.

Perhaps the dog is too energetic and might jump on or smother children or the elderly. This is another reason an owner might choose to warn people away.

If a dog has recently been through a medical procedure, is old, or has an ongoing medical problem, the owner might put on the ribbon. Again, this doesn’t mean the dog is aggressive or shy or even doesn’t want to play. A dog owner might choose to put the ribbon on for the dog’s own safety and it might be a temporary measure.

And yes, a dog wearing a yellow ribbon might mean the dog typically reacts aggressively to humans or other dogs and the owner is trying to warn you. It would be best to heed their warning.