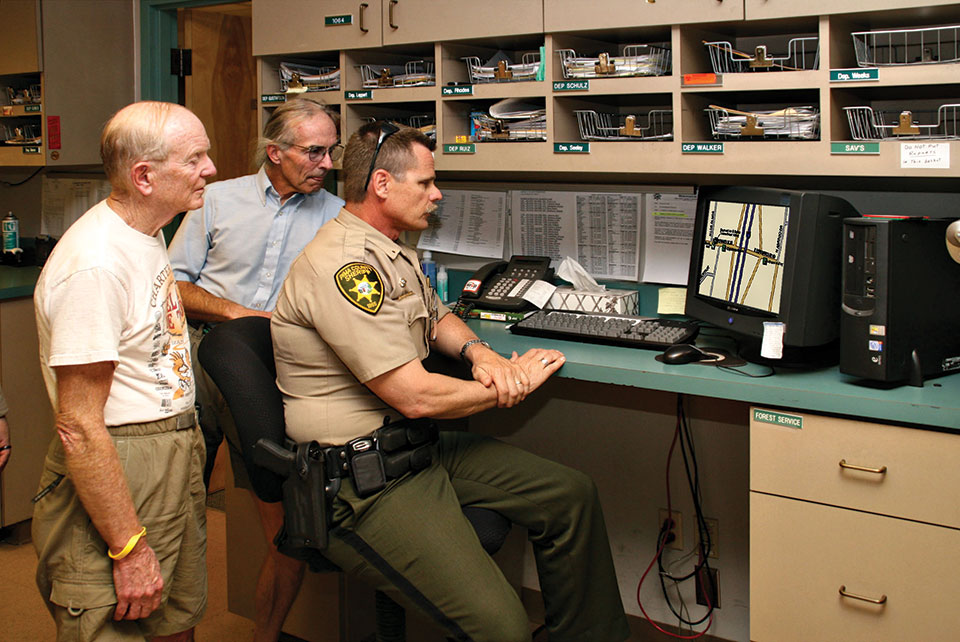 Local cyclists Bill Adamson and Jim Jordan plan the route for the first local Ride of Silence with help from the Pima County Sheriff’s office.

This will be the twelfth year for observing the Ride of Silence in the Santa Cruz Valley area. What started out to be a group of 30 bicyclists in the initial event has now grown to a regular group of 70 riders. When planning the first ride the organizers were approached by Pima County Sergeant Eric Thompson and then Lieutenant LT Pratt, Green Valley District Commander, to explore how they could assist. The result was an escort by motor units from the Sheriff Department which has since then provided recognition and safety for the ride participants. A few years later, after establishing the bike patrol unit, SAV squads and bike patrol members volunteered to assist with escorting the local ride. A discussion in the Walmart parking lot with then Fire District Operations Chief Bill Bohling resulted in local fire fighters bringing a fire engine to each observance of the ride. Cyclists in the area appreciate the dedication of these units in protecting their safety, not only at the annual Ride of Silence, but during the year.

Last year we were honored to have County Supervisor Ray Carroll join us for our ride. This year we are pleased to welcome LT Pratt back to the community. After being with the Pima County Sheriff Department for 30 years, including serving as the Green Valley District Commander from 2002 to 2008, he is now employed as the Community Outreach Coordinator for the Green Valley Fire District. His duties include serving as the point of contact for the news media and supervising the 60 Fire Corps volunteers.

The Green Valley/Sahuarita community is a safe area to ride your bike and has experienced very few conflicts with vehicle drivers. The large number of cyclists encourages drivers to be aware of cyclists sharing the roads. Cyclists need to be equally responsible and are asked to be aware of their surroundings and to always follow all traffic rules.

On May 17 cyclists across the country and world will take to the roads in a silent procession to honor cyclists who have been killed or injured while cycling on public roadways. Participants in the twelfth local observance of the Ride of Silence will leave from the GVR East Social Center at 6:00 p.m. on Wednesday, May 17 and slowly ride a seven mile route. Participants are asked to assemble at 5:30 p.m. and enjoy light refreshments provided by Santa Cruz Valley Bicycle Advocate committee members.