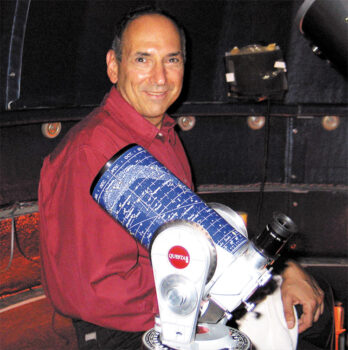 The Quail Creek Science Club is proud to bring to the attention of residents of Quail Creek that we will be sponsoring a lecture by Dr. David Levy, the renowned co-discoverer of the Shoemaker-Levy Comet that crashed into Jupiter in 1994.

David H. Levy is arguably one of the most enthusiastic and famous amateur astronomers of our time. Although he has never taken a class in astronomy, he has written more than three dozen books, was published in three astronomy magazines, and has appeared on television programs on the Discovery and Science channels. Among David’s accomplishments are 23 comet discoveries, the most famous being the Shoemaker-Levy 9 that collided with Jupiter in 1994, a few hundred shared asteroid discoveries, an Emmy for the documentary, Three Minutes to Impact, five honorary doctorates in Science and a Ph.D. which combines astronomy and English Literature. Currently, he is the editor of the web magazine, Sky’s Up!, and has a monthly column in the local Vail Voice newspaper. David continues to hunt for comets and asteroids, and he lectures worldwide.