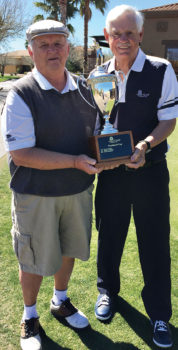 Tim Phillips, president of the QCMGA, presents the President’s Cup trophy to the 2017 winner – Paul Athey

Who can navigate the three nine-hole courses for three days and emerge as the winner of the President’s Cup, the QCMGA’s premier net play annual event? This is a handicap or net tournament where there are no “gimmes” and all putts are holed. Every participant has a chance to win this prestigious tournament whether boasting a handicap of three or 33. Over the last six years handicap winners have ranged from nine to 25. There were five different flights in the field depending on your handicap index level, starting from the lowest index to the highest. Great balmy weather was experienced for the first two days of this event while the third day was only slightly less than perfect. So the weather was no excuse this year.

Going into the final round there were six players within two strokes of the leader Paul Pantley. All flights had players close to the top of the field. When the dust finally settled in the early evening hours of February 14, the scoreboard revealed a winner by the scantiest of margins – one stroke. A review of the scorecards maintained this small margin.

This year’s winner was Paul Athey from Flight No. 2 with a sterling total of 202 for the three rounds 24 strokes under par. He was followed closely by Jeff Carmien, Greg Royer, Paul Pantley and Jim Hart with 203 totals. Paul’s margin of one stroke can be attributed to a miracle shot he made on his last hole – Coyote No. 4. Having placed his drive into the jungle beside the green and behind a jumping Cholla, he calmly punched a low iron shot that bounced around the Cholla and up onto the green stopping three feet from the flag. He made the putt and when Greg Royer missed his birdie putt on the same hole, he maintained his one shot victory.

Jim Hart at age 86, shot a spectacular 59 in the third round from the copper flight as did Ron Parle, also a formidable round. Jim’s total score of 193 was subject to a 10 shot adder as he was playing from the copper tees, giving him a total of 203 for the event, one shot short of the overall winner. Jim beat his age by eight shots and now has reached a total of 711 times beating his age.

Here are the flight winners from all five flights:

To all who competed, thank you and to the winners – Congratulations! It couldn’t have been any closer.