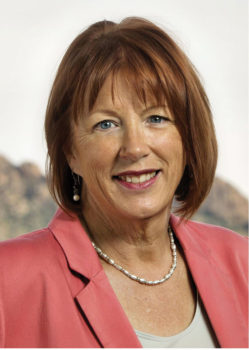 Barbara LaWall, Pima County Attorney and Dr. Jo Holt, Chair, Pima County Democratic Party, will be the guest speakers at the Democrats of Quail Creek meeting on May 21 at 3:00 p.m. in the Ocotillo Room of the Kino Conference Center (next to the golf shop building). The public is welcome to attend.

In 1996 Barbara LaWall became the first woman ever to be elected Pima County Attorney. Previously she had been a Deputy County Attorney for 20 years, during which she prosecuted criminal cases as a trial lawyer, managed the Criminal Division as the Chief Criminal Deputy and oversaw administrative, budgetary and policy matters as Chief Deputy County Attorney. “I worked my way up through the office, prosecuting every type of case imaginable. I was promoted to manage the Criminal Division as Chief and then learned about budget, personnel and administration as Chief Deputy,” LaWall said.

“I am running for re-election because it’s been my passion and calling for my entire legal career. For four decades I have dedicated myself to protecting the safety of those who obey the law. I am deeply committed to reducing the level of crime and violence in our community. I am passionate about serving victims and I want to continue to use my talents to make this community better and stronger.”

Dr. Holt was born in Texas and grew up in a rural community south of Houston. She’s a mom, a former caregiver, a lifelong Democrat and had a rewarding career as a research scientist. She first came to Tucson as a postdoctoral fellow at the University of Arizona and returned many years later to Oro Valley. She ran for the Arizona State Senate in 2012 and 2014. “My career in scientific research brought me to Tucson, via Texas A&M University (bachelor’s degree in Chemistry in 1975) and Colorado State University (PhD in Biochemistry in 1982),” she said.

“Scientists never really retire, but I chose to take a formal retirement from Washington University School of Medicine (St. Louis) in 2006 in order to care for my husband, Gary, who passed away four years ago from early-onset Alzheimer’s disease. I returned to Tucson and became active in politics, mostly out of great concern for the increasingly extremist political climate in southern Arizona.”

“Big things are happening at the Pima County Democratic Party (PCDP). We are modernizing our computer systems, many of our procedures and our website and calendar are being brought up to date. We’re planning for a future upgrade of our building while we’re preparing for our biggest fundraiser of the year, the Udall Dinner on May 27, with primary speaker former Texas State Legislator Wendy Davis.”

“The PCDP is assisting campaigns hand-in-hand with the coordinated campaigns for both legislative and congressional races. And we’re restructuring our county committees to include more precinct committees from all parts of Pima County. We’re doing these things for one reason: to elect more Democrats in Arizona in 2016 and in the years beyond!”