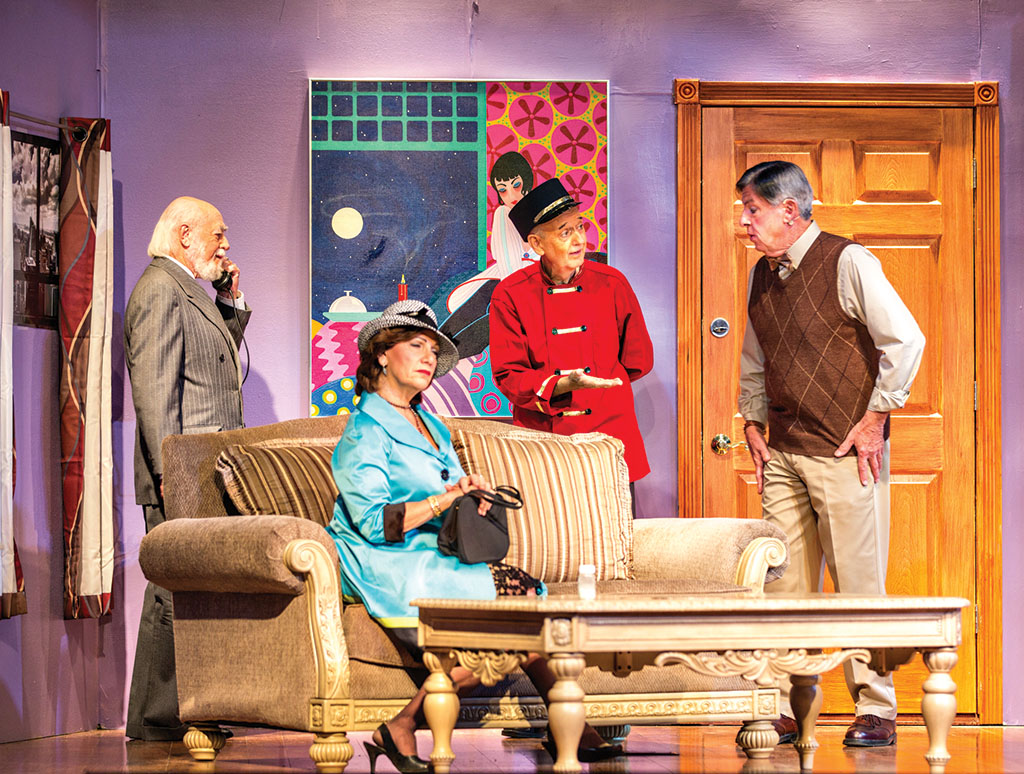 Lend Me A Tenor was a smash hit for the Quail Creek Performing Arts Guild in the spring of 2015.

If you liked the Tenor you’ll love the Butler.

Last spring the Quail Creek Performing Arts Guild (PAG) presented the hilarious play, Lend Me a Tenor. Based on audience comments, it was a hit. And in 2014 audiences raved about PAG’s production of Moon Over Buffalo.

Well, hold onto your seats – here comes another one! Who’s in Bed with the Butler? is a fast-paced comedy by Michael Parker. It’s not too early to mark your calendars for this brilliantly crafted play. Performances are April 7, 8 and 9, 2016, in the Madera Clubhouse Crystal Ballroom.

The plot centers around the estate of a late billionaire who has bequeathed all of his assets to his only daughter Constance. All, that is, except the 22-million-dollar yacht he gave to Josephine, a 25-million-dollar art collection left to Renee and some priceless antique automobiles willed to Marjorie. Constance arrives at her father’s mansion with her lawyer, determined to get to the bottom of it all. The butler seems to be the key.

Here’s what a few theater critics have said about Who’s in Bed with the Butler?:

“Full of laughs and mile-a-minute dialogue— bring lots of Kleenex for the tears of laughter.” – The Winchester Press

“For Parker, farce is serious business. You must see this romp.” – The Sacramento Bee

“Who’s In Bed with the Butler? is a wild ride. This play is a hilarious success—.” – The Santa Barbara Independent

“Superb delivery of the delicately balanced comedy—the action and the laughs are non-stop.” – The Flint Journal

Two initial ticket sale dates have been announced: Saturday, February 6 at 8:00am in the clubhouse lobby (not the Concierge Desk) and Monday, February 15 in front of the Grill during Pasta Night. Seating is cabaret style with eight to a table. You do not have to be a Quail Creek resident to attend a show. If you have friends or family who live in Green Valley, Sahuarita, Santa Cruz County, Tucson or wherever, please pass on PAG’s show announcements.

Members of the Performing Arts Guild are your friends and neighbors who brought their passion for theater with them when they moved to Quail Creek. Not all members are actors, singers, dancers or musicians; there are costumers, makeup artists, set designers, carpenters, stagehands, sound-board operators, props people, ticket sellers, program designers, audience members and more.

All residents are encouraged to join, even if your only interest is applauding a good show. In fact, without an audience there is no show! Dues are just $10 per year.

If you know of anyone either inside or outside of Quail Creek who might like to receive emails about PAG shows, please ask them to email [email protected] If you are interested in joining the Quail Creek Performing Arts Guild, please contact Frank Gunn at [email protected]