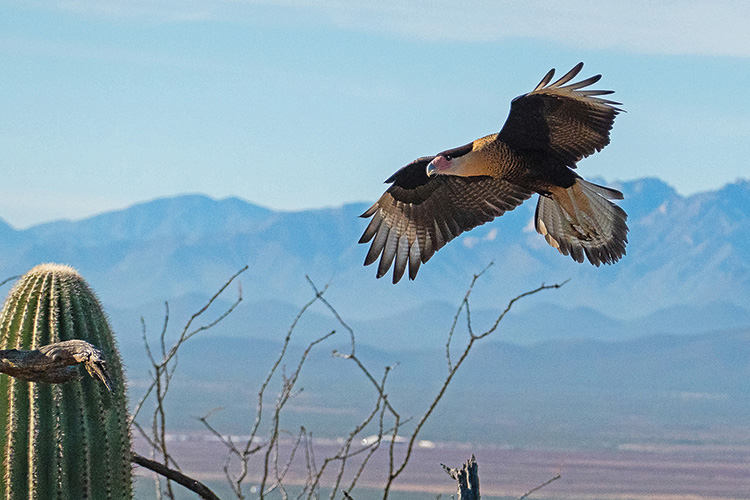 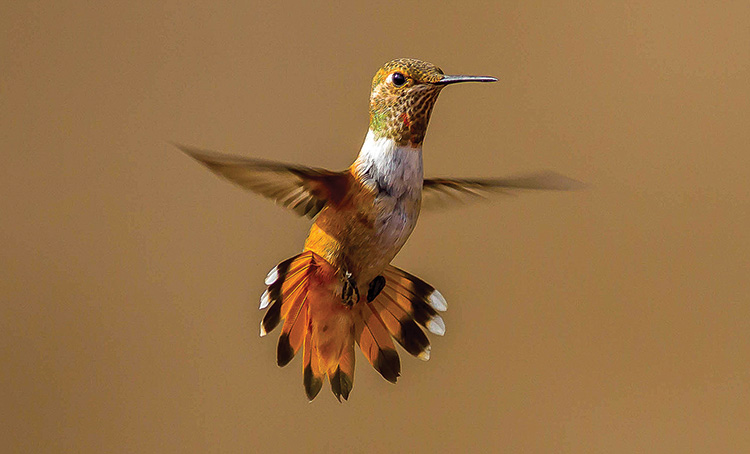 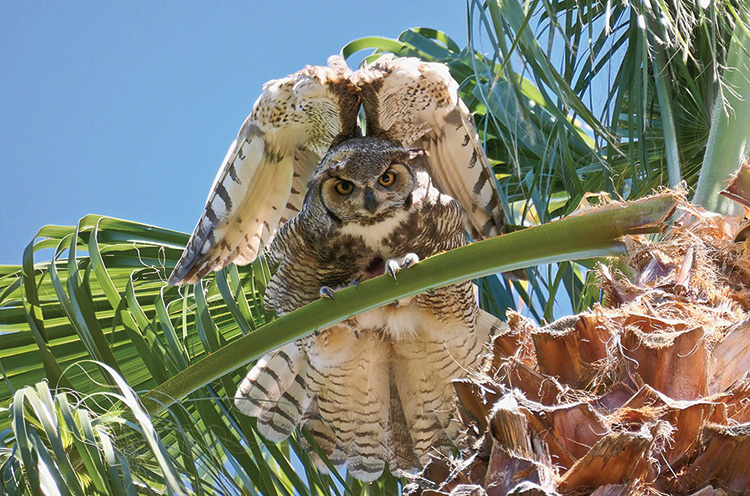 The Photo Club of Quail Creek continued with its monthly member’s contest, with April having the topic of birds. Each club member could enter up to three photos taken in the last three years. This subject was an extremely popular one for the members and drew 42 entries. All of our entries were very good, making it hard for the judges. All of the photos can be seen on our Flickr site: tinyurl.com/y87esl99.

John Tubbs won first place with his photo “Crested Caracara Landing.” John commented, “This image was taken during a ‘Raptor Free Flight’ program at the Arizona-Sonora Desert Museum, where my wife and I are docents (though like every other organization they have been closed since about mid-March). I shot a lot of pictures trying especially to get good in-flight images. This was one of the best ones. It takes a lot of practice and appropriate equipment to reliably get flight shots. I cropped this slightly to get the bird in the best position, and show the background. Then just a small amount of checking and tweaking exposure, saturation, and sharpening.” John used a Sony RX100M6, shooting at 200mm, 1/8000 sec at f/4.5, and ISO 800. Post processing was done in Photoshop.

Nick Pulcinella took second place with his photo “Rufous Hummingbird.” Nick commented, “This photo of the Rufous Hummingbird was taken Sept. 2, 2017, at the Ash Canyon B&B near Hereford, Ariz. Ash Canyon B&B is a wonderful place to photograph hummingbirds. The day I visited, there were probably at least 75 to 100 hummingbirds visiting the three dozen or so feeders. I had been trying for a few years to try and capture an image of a Rufous Hummingbird with spread tail feathers. The size and shape of the tail feathers is the best way to separate this species from the nearly identical Allen’s Hummingbird, a much rarer visitor to Arizona. I was very lucky to capture the image I had always hoped for. The only post processing I did was cropping.” The camera used was a Canon 7D. The photo was shot at 400mm, 1/1250 sec, f/5.6, and ISO 640. Post processing was done in Lightroom.

The photo “Stretching After Nesting” by Steve Piepmeier placed third. Steve said, “Photographing a Great Horn Owl is always a special treat. And a mother having a baby is a real bonus. As we shelter in place, I named her Shelteria. She tended her egg 24/7 and as word got out, she became a paparazzi item. To capture a rare moment without shooting in burst mode requires persistence and patience. Shelteria was stretching her wings after nesting her egg for a long time.” The photo was taken with a Panasonic ZS200, shooting at 1/250 sec, f/6.4, and ISO 200.

The Photography Club of Quail Creek has a monthly photo contest for its members and also schedules numerous photo field trips for members throughout the year. Meetings are held the second Wednesday of the month at 7 p.m. at the Kino Conference Center in the Mesquite Room. The room venue could vary each month. Consult the club’s constantly updated website pcqc.org as well as the weekday HOA What’s Happening for additional information.