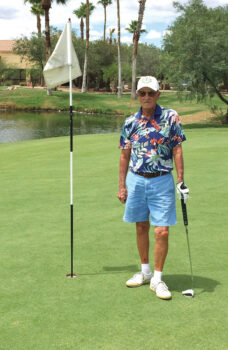 Jim Hart notched his 1,401st round on July 24 on the coyote course of shooting or beat his age of 89.

Most retirees have great expectations of playing better golf once they have retired and can dedicate more time to improving their games. Age usually becomes a determining factor in seeing scores rise, and health issues begin to increase.

But Jim Hart, at 89, is still performing at prodigious levels on an almost daily basis, defying the age clock. Golf has been his dedicated passion for decades, with most of his games played at Quail Creek. To date, in 2020, Jim has played 81 times and has shot or beaten his age on every one of them. On Tuesday, July 21, his round was an unbelievable 12 strokes better than his age. Obviously, course conditions have little bearing on the final outcome of every round.

On July 24, Jim notched his 1,401st round in shooting his age or better, playing the Quail/Coyote combination. That is a record at Quail Creek Country Club, that has little chance of being matched or even approached.