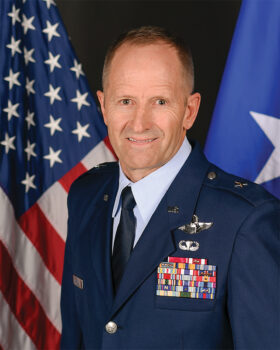 The Green Valley Chapter was delighted when they learned that they could resume holding meetings in the Crystal Ballroom in 2021—that is assuming that the CDC or Arizona officials do not impose additional restrictions because of COVID-19. Their first event will be a luncheon on Tuesday, Jan. 19 in the Madera Clubhouse. They will have a social half hour beginning at 11:30 a.m. with lunch being served at 12:05 p.m. The luncheon will feature a choice of oriental salad or club croissant. Cost will be $22. Beer and wine will be available for purchase. Reservations can be made by contacting Quail Creek resident Philip Lamb at [email protected] or 520-771-6098. Deadline to sign up is Jan. 9.

General Butler received his commission from the U.S. Air Force Academy in Colorado Springs in 1988. He attended undergraduate pilot training at Reese AFB, Texas, followed by several operational, combat, and training assignments in the F-16. He joined the Tucson ANG in 1996 where he has served in several capacities, including an exchange tour with the Royal Netherlands AF. He is a command pilot with more than 5,000 flight hours that includes more than 200 combat hours. He has flown F-16, T-37, and T-38 aircraft.

General Butler earned his bachelor’s of science degree in civil engineering from the Air Force Academy in 1988. He earned a master’s of aeronautical science technology degree on the Luke Air Force Base campus from Embry-Riddle Aeronautical University.

General Butler was awarded the Legion of Merit, Meritorious Service Medal with two oak leaf clusters and numerous other medals during his Air Force career.

All officers and warrant officers currently serving on active duty, retired and former officers, officers in the reserve, National Guard, and members of the U.S. Public Health Service are eligible to join MOAA. For more information, please visit their website at greenvalleymoaa.org.