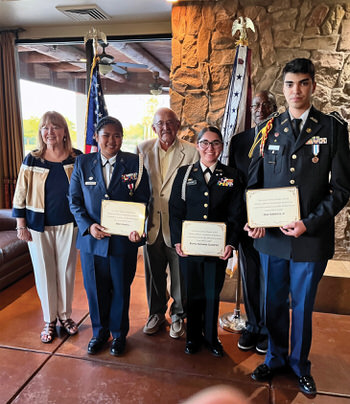 The Green Valley Chapter Military Officers Association of America (MOAA) awarded three $1,500 scholarships to JROTC Cadets at its May dinner meeting. The money for the scholarships came from grants as well as the generosity of many Quail Creek residents.

Receiving a scholarship from Nogales High School was Air Force JROTC Cadet/Lt Col Ellen Grace Andres. Ellen was in AFJROTC all four years of high school. She was also a member of the Science and the Honors clubs. She has a blue belt in Taekwondo and believes that martial arts have significantly improved her life. She has also volunteered for a variety of causes. Ellen will start classes at Pima Community College in the fall. She hopes to eventually get into an aerospace or aeronautical science program. While in college, she wants to join an ROTC unit. Her ultimate goal is to become a pilot as an Air Force officer.

Earning a scholarship from Rio Rico High School was Cadet/Captain Jose L. Valencia, Jr., a member of the Army JROTC. While participating in JROTC for four years, Jose was active in their Law and Public Safety Program. His interest in this program led him to volunteer to help with security at various events. He also participated in car washes, parades, and the Tubac Festival. Cadet Valencia will attend Arizona State University to pursue a degree in computer science. Ultimately, he hopes to work for the FBI in a STEM-related capacity.

Cadet/LT Briana Gonzalez-Gutierrez is the executive officer of Alpha Company with the Naval JROTC unit at Sahuarita High School. She is a graduate of the Naval JROTC Leadership Academy, an accomplishment achieved by only two percent of the cadets in Arizona and Southern California. Briana is an active member of the Arizona Army National Guard and was promoted to the rank of E-3 in May. She will begin classes at Grand Canyon University in the fall and hopes to obtain a degree in criminal justice. After completing her degree, Briana would like to have a career with U. S. Customs and Border Protection. She also plans to further her career in the Arizona Army National Guard.