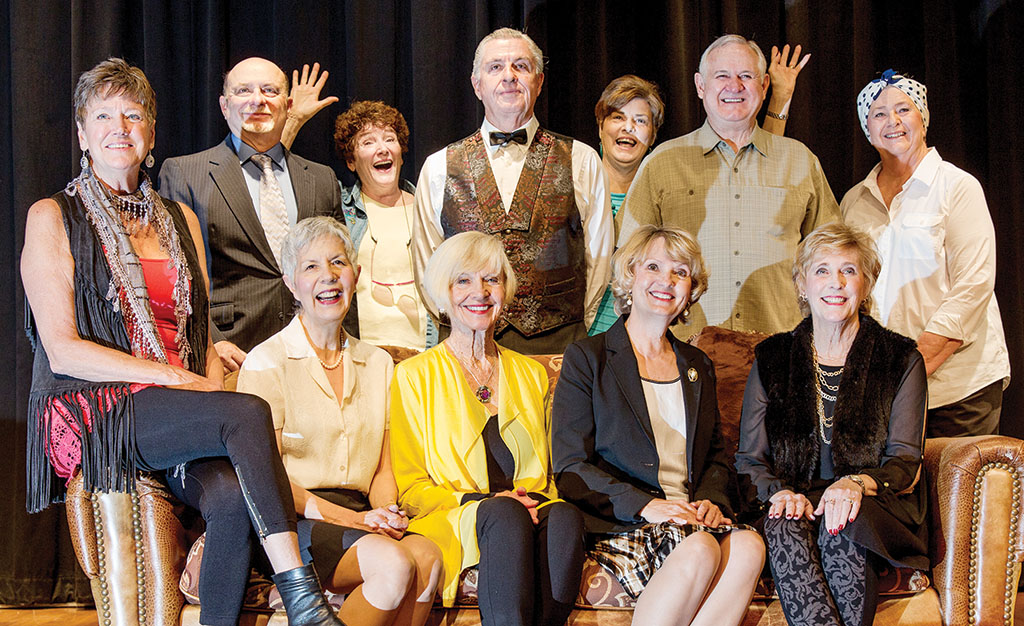 Karen Doyle, president of the Quail Creek Performing Arts Guild (PAG), was surprised by a recent call from the playwright of PAG’s spring offering, Who’s in Bed with the Butler. Michael Parker called from Florida to express his pleasure at having his work produced in Quail Creek. Parker reiterated his excitement in a separate conversation with PAG Vice President Davey Jones.

Parker’s numerous farces have been well received by audiences across the country and around the world. He has also co-authored several plays with his wife, Susan Parker.

The cast of Who’s in Bed with the Butler was chosen at auditions held in January and consists of veteran PAG performers as well as some talented newcomers. The play will be directed by the very experienced Maggie Brown, assisted by Diana Paul. Here are the actors (and characters) who will certainly have you laughing at their antics: Sandy Boyer (Josephine); Pam Campbell (Susie); Holly Crombie (Marjorie); Audrey Fatula (Renee); Sandy Haegele (Agnes); Ray Hebert (Vance); Sandi Hrovatin (Connie); Bill Humphry (Davis) and Davey Jones (Clifton).

The plot centers around the estate of a late billionaire who has bequeathed all of his assets to his only daughter Constance, but before his death he gave away many valuable assets to three women. Constance and her lawyer want to know what happened to the yacht, the antique automobiles and the art collection. The butler isn’t saying.

Find out Who’s in Bed with the Butler at performances on April 7, 8 and 9, 2016, in the Madera Clubhouse Crystal Ballroom. Tickets are available at The Grill on Pasta Night Mondays, February 15 and 29, with additional dates to be announced. Tickets may also be purchased from Sandy Haegele at 520-344-7719. Tickets are not available at the Concierge Desk.

Seating is cabaret style with eight to a table. You do not have to be a Quail Creek resident to attend a show. If you have friends or family who live in Quail Creek, Green Valley, Sahuarita or elsewhere, please pass on PAG’s show announcements. Better yet, send their email addresses to Jeffrey Webster at [email protected] and we will keep them informed of upcoming shows.

PAG was organized by and for the residents of Quail Creek. Members include your friends, neighbors, golf partners and people to whom you wave in passing. Anyone with an interest in theater, from actor to audience member, is encouraged to join. We guarantee you will feel welcome and dues are just $10 per year. Find out more by contacting Frank Gunn at [email protected]