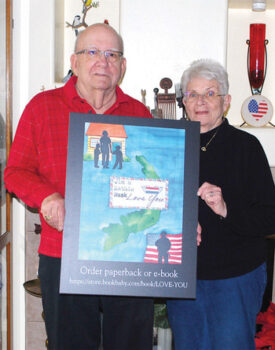 Jim and Kathie Rusk with their book

After a summer break, the Green Valley Chapter, Military Officers Association will resume a full schedule of activities starting with a luncheon in the Madera Clubhouse on Sept. 7. The social period will begin at 11:30 a.m. with lunch being served at noon.

There will be two choices for lunch: Chicken Bruschetta: sautéed chicken breast served with a fresh tomato, basil, garlic reduction and topped with shredded parmesan, or a Southwest Salad: cilantro lime grilled chicken served over fresh greens, topped with black bean and corn salsa, diced tomatoes, green onion, black olives, and chopped cilantro. Both entrees include apple pie with caramel sauce and whipped cream for dessert. The cost for the luncheon will be $24. A vegetarian option is available by request.

Speakers at the luncheon will be Jim and Kathie Rusk who will talk about their recently published book Love You. The book is a compilation of letters, tapes, and memories that “air mailed” devotion between Long Binh, Vietnam, and Cleveland, Ohio, from July 1969 to July 1970. Jim was serving as Chief of Non-Appropriated Funds, Army Audit Branch, and his wife Kathie was at home in Cleveland with their two young sons.

The photographs included in the book were taken by Jim during his travels in Vietnam and while on R&R in Hawaii.

Jim reported that “A special part of the story is the relationships developed and nurtured during our separation among fellow officers deployed with me to Vietnam and among family and friends supporting Kathie at home. The value of that support system played an essential role in our story.” Their story presents an intimate view of the struggles and triumphs of a military family facing separation.

Having recently celebrated their 60th wedding anniversary, Kathie said, “We hope Love You will help educate readers on the level of commitment and devotion required to support our men and women in uniform.”

Jim received his Regular Army commission through ROTC at Kent State University in June 1961. He entered active duty in December 1961 as an Infantry officer. Jim and Kathie were married on April 28, 1962. Their Army life, including a branch transfer to the Finance Corps, lasted until Jim’s retirement in June 1983.

All officers and warrant officers, currently serving, retired, or former are invited to join the group. The Green Valley Chapter is one of the most active in Arizona. Each year they provide three scholarships to JROTC seniors and food for the troops and turkeys for the troops of the 162nd Fighter Wing, Air National Guard. They support the homeless and hospitalized veterans on a continuing basis with donations of toiletries, calendars, and snack foods. For more information about the group, please visit their website greenvalleymoaa.org.

The deadline to sign up for the Sept. 7 luncheon is Aug. 26. Reservations can be made by emailing [email protected]