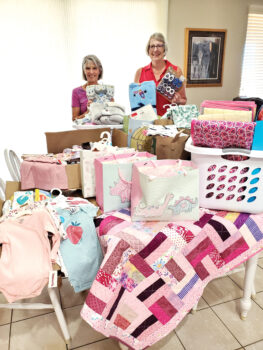 Karen Baker (left) was so pleased not only with the quantity but also the variety of baby items delivered by the Lady Putters president, Janet Wegner. (Photo by Jane Herum)

Even though it has been over a year since they have been together as a group, the Lady Putters have remained in touch. When word went out that The Women of Quail Creek (TWOQC) would once again host a very modified baby shower for the young airmen of the 162nd Fighter Wing of the Air National Guard in Tucson, the Putters wanted to help.

Putters president, Janet Wegner, put out a plea for donations in her Monday morning message, asking that ladies bring gifts for the babies to her house on April 7. As often happens, some were unavailable at the prescribed time but still wanted to help, so Janet graciously agreed to accept donations that were dropped off at her house during the week preceding the collection date.

The ladies responded with generosity. There were five handmade quilts, crocheted blankets, fleece blankets, and 12 receiving blankets. Of course, there were also baby clothes in sizes from newborn up to 12 months since most Lady Putters, being moms themselves, knew firsthand how quickly a baby grows in the first year. And, of course, there were diapers and wipes, bibs, and bath towels.