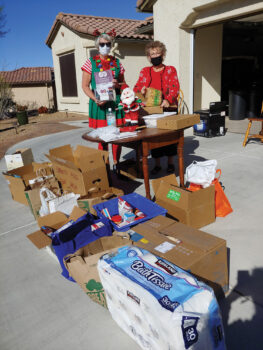 Janet Wegner (left) and Sharon Schoen with some of the donations received on Dec. 16. (Photo by Peggy McGee) 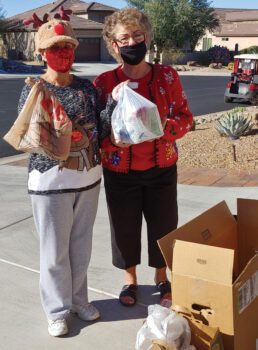 Even though they have not been able to putt together as a group for over nine months, the Lady Putters decided to continue their holiday tradition of helping the Green Valley/Amado Food Bank. Putters president Janet Wegner set up the food bank drop point in her driveway, where she greeted the ladies clad in her now famous elf attire. She was assisted by two junior elves, Putters Vice President Sharon Schoen and Peggy McGee, who went to the vehicles to carry the boxes and bags of food and to wish the donors a very happy holiday.

Approximately 35 ladies came by bringing groceries, checks, and sometimes both to help the food bank. Many more local residents are seeking help because of COVID. It was obvious that many donors had made the trek to Costco given the size of the containers. In the end, the ladies donated 340 pounds of groceries and $1,290. This amount included a $200 donation from the Lady Putters’ treasury.

When everything was delivered to the food bank, Operations Manager Vicki Turner was amazed by the club’s generosity, especially since the group had not been able to meet nor had any income since March.

Thank you, Lady Putters, for making the holidays a little merrier for the food bank clients.