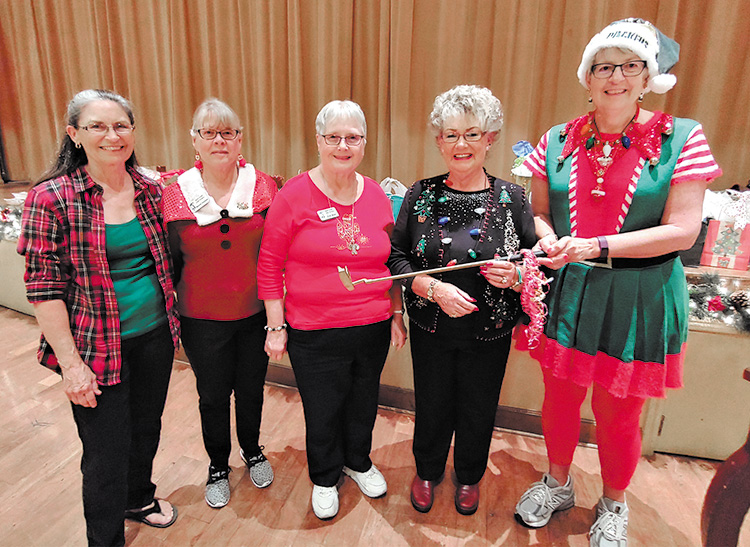 The Board of Officers for 2020 for the Lady Putters was sworn in at the holiday luncheon. They include (left to right): Lynda Pilcher, Treasurer; Monte Hudson, Secretary; Vicki Mahr, Membership; Sharon Schoen, Vice President; and Janet Wegner, President; Photo by Sylvia Butler.

About 75 ladies attended the Lady Putters Holiday luncheon after putting on a brisk December morning. They enjoyed a meatloaf meal with a slice of holiday perfect pumpkin pie for dessert. At each place setting was a cleverly wrapped yet practical gift from the board with the message:

Money is scarce and times are hard.

So, we’re giving you this instead of a card.

So—bottoms up. Just ‘cause we care!

While waiting for the meal to be served, the top golfers for the preceding nine weeks were announced. Teresa Buttleman received the Coveted Quail (low net) award for her score of 30.45 while Marci Yenerich was recognized for her Low Gross Score of 36.33. Frieda Hyles and Marci Yenerich tied with the most holes-in-one with 17.

Money hole winners included Anna Glennie, Lou Moultrie, Lynda Pilcher, Joyce Walton, Marci Yenerich, and Sally Newton who got hers on the day of the luncheon.

After a show of hands for election the Board of Officers for 2020, the new board was sworn in my Kimberly Nichols. Janet Wegner will continue as President, ably assisted by Vice President Sharon Schoen; Secretary Monte Hudson; Treasurer Lynda Pilcher, and Membership Chair Vicki Mahr. Sherri Cerrone was selected to fill a newly created position of Event Chair.