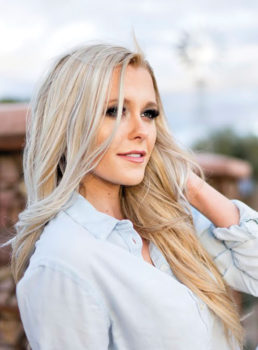 Kaylor Cox is a 19-year-old country music singer/songwriter, originally from Sioux Falls, South Dakota. Living in Tucson, Arizona for nine years, she now works part time at Smith & Cox Retirement Planners and on her music career the rest of the time. She plays guitar as well as piano and enjoys writing original music. Besides country, she also enjoys singing anything from 80s rock to pop.

Her formative years were spent dancing, singing and acting. Being on stage is one of her biggest passions. As she aged, singing, as well as songwriting, became her main focal point.

Kaylor has written about 15 songs that are complete and she feels confident about them. She has parts of songs she has written, they number in the dozens, which someday may come back around and be completed. She says, “When it’s a really good song, I can finish it in about 20 minutes. If I get stuck on a song I just put it away and start a new one.” She wrote a song called Stand Tall after the police shootings in Dallas this past year and she actually had a Dallas Police Officer reach out to her and thank her for writing that song. “I love when I can make people feel something through my songs; it’s the best being able to connect with others.” Another favorite she wrote is Animal which can both be found on her website, www.kaylorcox.com. You can find Kaylor on Facebook, Instagram and Twitter as @kaylorcoxmusic, and she regularly posts YouTube videos. All of her gigs as well as pictures and videos, are posted on her social media.

In the future, Kaylor hopes to move out to Nashville to pursue her singing and songwriting career and see what happens. Her goal is to get a publishing deal so she can continue to song-write daily. That will hopefully lead to her being able to perform even more and at bigger venues. “No matter what happens, I will always be a musician. Whether I’m getting paid for it or not, I will continue to do what I love every single day.” Kaylor has recently taken her talents to the children’s hospital where she walks around to sing for the kids. She says to see those kids smile and sing along is why she does it. “It’s so much deeper than just money for me. Bringing people joy fills my heart and there’s nothing better than that.”