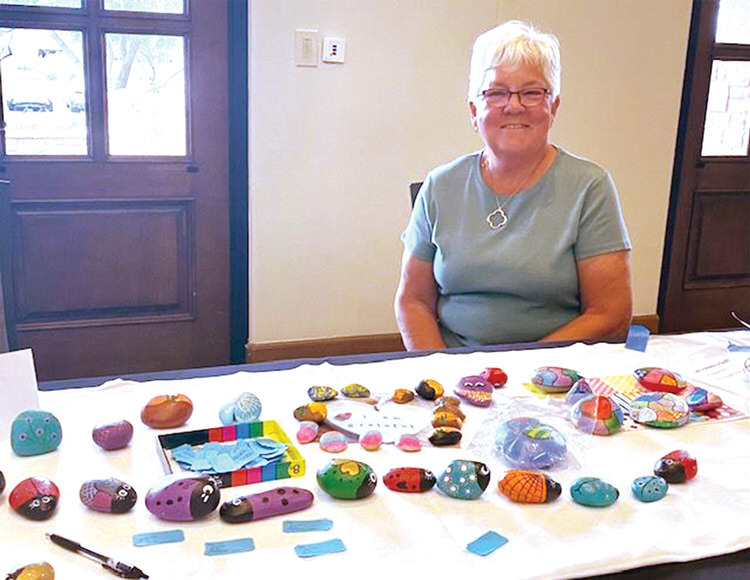 Janet Rumford surrounded by her creations (photo by Sharon Pulcinella)

Wouldn’t it be fun to take part in a “scavenger hunt/hide-and-seek” that spreads positivity, kindness, and inspiration to total strangers? If you’ve ever found one of the creatively painted rocks being hidden all over Quail Creek and Green Valley, you already have!

The Women of Quail Creek (TWOQC) member Janet Rumford is one such rock artist. Janet has come to love this hobby as a perfect way to express herself while bringing smiles to those in need of a little sunshine. She is part of a nationwide movement that has become a phenomenon over the last several years. The concept is simple but powerful: Decorate rocks with designs or inspirational messages, then hide them wherever you go, to uplift the people who find them.

Rock painting groups have sprung up all around the world with the mission of spreading happiness with their creations. Many of these groups have a presence on social media (like Facebook), and it is estimated that well over 100,000 people have joined in, with an estimated 500 rock-painting groups across the United States. One of these groups is right here in Green Valley and has its own Facebook page called Green Valley Rocks.

Over a year ago, when TWOQC small groups were just getting started, Janet offered to share this relaxing hobby with other members of TWOQC. Originally intended to be one class, she found that both she and the ladies who participated enjoyed it so much that she decided to teach more classes with different themes every two months. Janet’s classes have become an extremely popular TWOQC small group offering ever since.

What should you do if you find a painted rock? That’s up to you! Keep it as long as it brings you joy or rehide it wherever you may be to pass the smile along. The artists always appreciate it if you take a photo and post it on the Green Valley Rocks Facebook page as well!

In the meantime, keep your eyes peeled as you travel around Quail Creek—you may just be lucky enough to find one of Janet’s rocks!