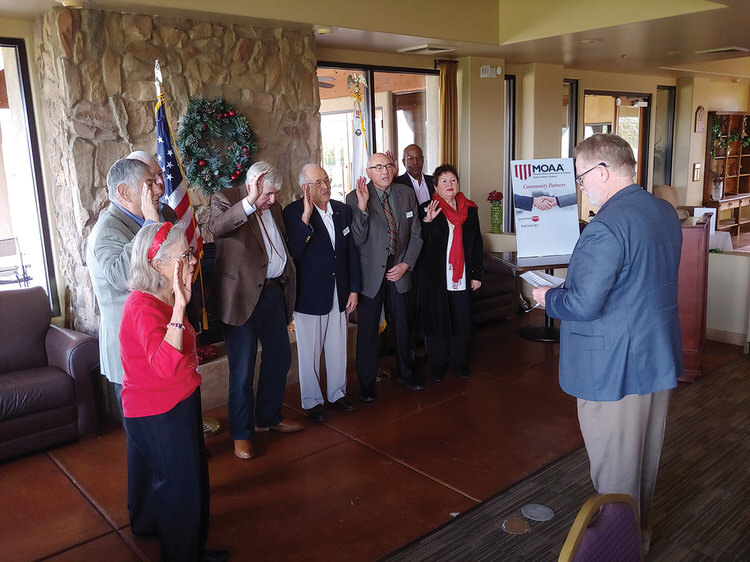 Newly elected members of the Green Valley Chapter Military Officers Association proved once again that Quail Creek residents are willing to step up and assume leadership roles when needed. Nine of the 13 board members live in Quail Creek. COL Nicholas Knight, incoming president of the Arizona Council of Chapters for MOAA, traveled from Yuma to swear in the new board.

The Green Valley Chapter is the third oldest in Arizona and one of the most active in the state. The chapter hosts at least six social events annually and throughout the year engages in philanthropic activities that support hospitalized and homeless veterans; the JROTC cadets at Walden Grove, Sahuarita, Rio Rico, and Nogales High Schools; Women Warriors; Toys for Tots; and the 162nd Fighter Wing, Arizona Air National Guard.

All currently serving officers and warrant officers, retired, former, reserve, and National Guard from the five military services as well as officers in the Public Health Service and the National Oceanic Atmospheric Administration are eligible for MOAA membership, as are spouses of deceased officers. For more information about the Chapter or to join, please contact Quail Creek resident CW3 Jack Bundy at 951-760-8706 or [email protected]

There is still time to sign up for the Chapter’s January meeting that will feature a talk on Internment Camps in Arizona during World War II. The luncheon will be held at Dominick’s restaurant on Jan. 19. (See the December Crossing for details.) Please contact Peggy McGee at 520-207-6188 or [email protected] to sign up.