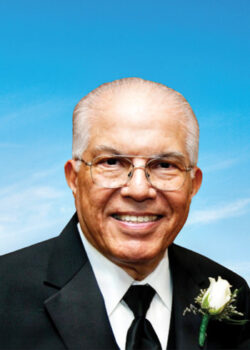 Dr. Anthony (Tony) Edward Castro of the Quail Creek community in Green Valley passed peacefully on Tuesday, May 24, 2022, after a long battle with Parkinson’s. Tony’s wife of 55 years, Marlene, was by his side.

Born March 4, 1935, in New York City, Tony was one of four children. He grew up in the Bronx, a second-generation Puerto Rican, with a dedication to academics. He achieved his B.A. degree in 1955 and M.S. degree in 1962 from NYU. Tony served as Airman First Class in the U.S. Air Force from 1957 to 1961. His love of science advanced his interest in veterinary diagnostic virology. He met his wife Marlene in Indiana. They were married in 1967 and had two children.

Tony earned his Ph.D. in virology from Purdue University in 1971 and DVM from the University of Minnesota in 1978. His career included work at diagnostic laboratories at OSU-Stillwater, UC-Davis, and Penn State. Tony was an author/co-author of 85-plus publications, 10 book chapters, and co-author of a book on diagnostic veterinary virology. Tony assisted colleagues in related virology fields and with specific conditions in cattle and pheasants. He received over $9 million in grants during his career.

Outside of work, Tony enjoyed family time and nature and fostered a continual curiosity about the universe. He collected Native American art, embraced culture, was a fan of car racing and NASCAR, and will be remembered for his dance moves, ear for music, love of movies, dry and witty sense of humor, and for his chili and chicken curry.