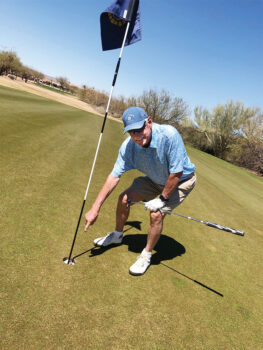 Congratulations to QCMGA member, Tim Phillips, for scoring a hole-in-one on March 20. He was playing with his wife and son when he shot his ace on Quail number four using an eight iron for a blue flag from 145 yards out. This was Tim’s second hole-in-one at Quail Creek; the first came 11 years ago.