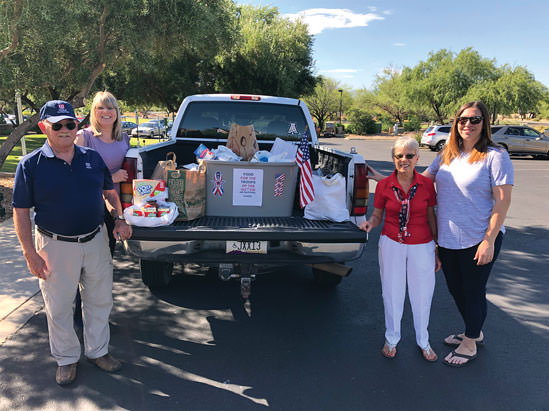 Jim Knox, president of the Green Valley chapter of the Military Officers Association of America (MOAA) scholarship and military assistance fund stated, “Wow, what a generous community Quail Creek is,” when he was told of the results of the 2019 Food for the Troops collection. This annual campaign supporting 162nd fighter wing of the Air National Guard is held during the week of the Fourth of July. The Women of Quail Creek (TWOQC) were the largest contributors, with about 140 pounds of food collected at their summer luncheon. All in all, 200 pounds of groceries were donated.

Monetary donations for the purchase of Turkeys for the Troops at Thanksgiving time totaled $675. And the 50-50 raffle winner, Ruth McDermott, stated when she won $333 that she will use the money to buy more yarn for her knitting projects and patriotic musical stuffed animals for TWOQC‘s annual baby shower next May. Ruth’s generosity is a true win-win situation for the young troops of the 162nd fighter wing.

When Mikie Hoeye, the family readiness program manager for the 162nd fighter wing, assisted by Sam Zurcher, picked up the groceries on July 5, she commented that the troops would be really pleased with all the donations by Chef Boy-R-Dee projects, a favorite of the airmen. She added that the food pantry was almost bare since donations tend to slow down during the summer so Quail Creek’s heartfelt response to the food drive was extremely timely.